Malala Yousafzai has visited her hometown Mingora for the first time since she was shot on a school bus by a Taliban militant in 2012.

Yousafzai and her parents landed in an army helicopter at a cadet school near the Swat Valley town in north-west Pakistan on Saturday morning.

Her uncle, Mahmoodul Hassan, told the Associated Press that the Nobel peace prize laureate had visited her home and also planned to reunite with friends and relatives. “We are grateful to the government and the army for facilitating this visit,” he said.

According to Pakistani broadcaster Geo TV, Yousafzai visited a local park in her town and addressed students at the cadet school, telling them she was delighted to be back in the valley. “Swat is a piece of heaven,” she said.

The visit to Mingora was not officially scheduled but had been expected after security in the area was noticeably beefed up in recent days. Roads into the town were also blocked off early Saturday morning.

Yousafzai, 20, was already a prominent advocate for girls’ education in October 2012 when a Taliban gunman boarded her school bus in Mingora, asked “Who is Malala?” and shot her, along with two others.

All three survived, but a bullet grazed Yousafzai’s brain and lodged in her neck. She received emergency care at army hospitals in Pakistan band was flown to Birmingham for further treatment, including skull reconstruction.

On Friday, Yousafzai told Geo TV she would not have survived without the quick response of Pakistani army surgeons and that she planned to return to the country after finishing her education.

She is a student at Oxford University and said on Friday that the other two victims, Shazia Ramzan and Kainat Riaz, had finished their schooling in Wales and were studying at Edinburgh University.

The Swat Valley intermittently fell under Taliban control during Yousafzai’s early school years resulting in frequent interruptions to classes as the hardline Islamist group banned girls’ education. It was a policy they reportedly enforced by blowing up hundreds of girls’ schools.

Despite the danger, she continued her activism, blogging under a pseudonym for BBC Urdu and appearing in several videos for the New York Times before she was shot.

Her attempted murder sparked a wave of revulsion in Pakistan and she said returning to the country on Thursday had been the happiest day of her life. Her surprise visit to the country has been widely celebrated but it also attracted criticism from fundamentalists who view her as an agent of western influence. 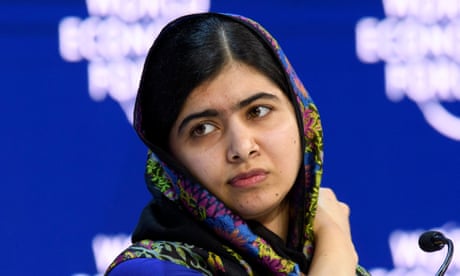 ‘Happiest day of my life’: Malala returns to Pakistan for first time since Taliban shooting

She told Pakistani media that the majority of Pakistanis supported her activism. “Those who do criticise have an absurd kind of criticism that doesn’t make any sense,” she said in an interview with The News outlet.

“What I want is people support my purpose of education and think about the daughters of Pakistan who need an education,” she said. “Don’t think about me. I don’t want any favour or I don’t want everyone to accept me. All I care about is that they accept education as an issue.”

Rather than silencing Yousafzai, the shooting turned her into a global icon for girls’ education. In 2014 she was awarded the Nobel peace prize, making her the youngest laureate in history. Her charity, the Malala Fund, has invested $6m (£4.2m) in schoolbooks and uniforms.

In her interview with the News she said she had been sitting in class when the news broke about her Nobel prize. “My teacher came into my classroom and called me outside,” she recalled. “I was worried that I might have done something wrong and I am in trouble. But she told me that I had won the peace prize. I said thank you. You don’t know how to respond. For me, it was for the cause of education.”

The trip to Mingora was timed to fit in with her university break, she added. “That was also one of the reasons because I could not miss my school. So this just finally happened. To be honest, I can’t believe that I am here in Pakistan. It still feels like a dream.”

She plans to return to the UK on Monday.

The Associated Press contributed to this report