During the COVID-19 lockdowns imposed by Southern African countries, some homes across the region became enclaves of cruelty, rape and violence for women and girls trapped with abusive family members and nowhere to report or escape the danger, Amnesty International said today in a new briefing. 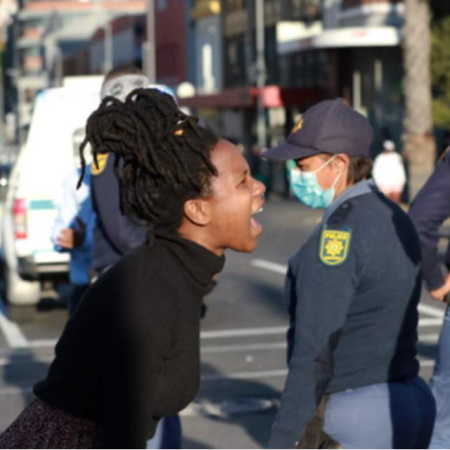 Harmful gender stereotypes embedded in social and cultural norms, which suggest that women must always submit to men or that a man who beats his wife does so because he loves her, have fueled the rise in violence against women and girls in Madagascar, Mozambique, South Africa, Zambia and Zimbabwe. As one activist in Mozambique said: “Girls are taught that husbands only beat their wives when they love them.”

Amnesty International also found in its briefing, “Treated like furniture: Gender-based violence and COVID-19 response in Southern Africa”, that women and girls who dare to report violence and abuse risk social rejection for failing to conform to gender roles — and when they do speak out, their complaints are not taken seriously by authorities.

“Lockdown measures meant that women could not escape abusive partners or leave their homes to seek protection. Across Southern Africa, women who suffered gender-based violence struggled to report abuse because both women and organizations working to provide protection and support to women were not seen as an “essential service”, and so faced severe restrictions of movement, resulting in them abandoning filing cases.”

Of the five countries where gender-based violence was documented in this briefing, Mozambique, South Africa and Zimbabwe stand out as countries where support services to women and girls subjected to violence and abuse were not taken into consideration in the design of the measures to control the spread of COVID-19.

Rape, beatings and killings during lockdown

Within weeks of countries being on lockdown, violence against women increased sharply across the region. In the first week of the lockdown, the South African Police Service (SAPS) reported receiving 2,300 calls for help related to gender-based violence. By mid-June 2020, 21 women and children had been killed by intimate partners in the country.

One emblematic case was the brutal murder of 28-year-old Tshegofatso Pule, who went missing on 4 June and was found four days later, stabbed and hanging from a tree in Johannesburg while eight months pregnant.

In Mozambique, civil society organizations received unusually high numbers of domestic violence cases after the start of the state of emergency in March 2020. In one case, a man killed his wife and then himself on 6 June in Matola district in Maputo province.

Across Southern Africa, women who suffered gender-based violence struggled to report abuse because both women and organizations working to provide protection and support to women were not seen as an “essential service”

Horrifying details also emerged of the robbery, rape and murder of a Maputo Central Hospital employee on 31 May 2020. She was on her way home, late at night because of the scarcity of public transport during the state of emergency restrictions.

In Zimbabwe, an organization that offers protection for women survivors of domestic violence, had documented 764 cases of gender-based violence in the first 11 days of the national lockdown. By 13 June 2020, the number was 2,768.

One Zimbabwean woman, Maria* (not her real name), was violently thrown out of her home by her husband after he moved his mistress in during the lockdown.

In Madagascar, the rise in poverty due to lockdown was a major factor for the increase in gender-based violence during the lockdown period, with women and girls becoming poorer, more economically dependent on abusive partners and therefore more exposed to abuse.

Zambia was the only country that recorded a slight decrease in gender-based violence during the national lockdown compared to the same period in 2019, according to official police statistics. The country recorded a 10% decrease in the first quarter of 2020, which may reflect the fact that women were unable to call for help rather than a decline in gender-based violence cases. However, one NGO, Young Women’s Christian Association, recorded an increase in sexual violence cases during the first quarter of 2020.

The briefing identified several barriers to justice for victims and survivors of gender-based violence across Southern Africa. These include a lack of trust in the criminal justice system and secondary trauma which victims and survivors often suffer at the hands of authorities, including the police, and health services when they attempt to report cases.

These barriers came into sharper focus during the COVID-19 pandemic. In South Africa for example, there has been public outrage about the institutional failures to administer justice for women and girls who are victims and survivors of gender-based violence, even though the country’s Domestic Violence Act of 1998 explicitly states that victims may lay criminal complaints against offenders.

South Africa’s Minister of Justice and Constitutional Development, Ronald Lamola, admitted on radio in June 2020 that there were weaknesses in the system that frequently failed victims of gender-based violence.

In Mozambique, when a gender-based violence complaint is filed, police are required to open an investigation. However, like in South Africa, many victims are reluctant to come forward because of pressure from society to put up with domestic violence, financial dependence on the perpetrator, and a lack of confidence in the criminal justice system.

According to civil society organizations, in some instances, police officers were accused of dismissing gender-based violence complaints because they saw them as family matters and not crimes. The stigma around sexual violence was also cited as a contributing factor to underreporting.

“It is shocking that for many in Southern Africa, the most dangerous place to be a woman or a girl during the COVID-19 pandemic is at home. This is simply inexcusable. The leaders of the Southern African Development Community (SADC) must ensure that prevention and protection of women from gender-based and domestic violence is an integral part of national responses to pandemics and other emergencies,” Deprose Muchena said.

“States must ensure that women and girls continue to have access to police protection and justice as well as to shelters and other support services to escape the blight of gender-based violence.”