Formula 1 has announced it will no longer use female models as “walk-on grid girls”, saying the employment of women for this purpose “is at odds with modern day societal norms”.

The news comes just days after the Professional Darts Corporation (PDC) confirmed women will no longer escort male players to the stage as “walk-on girls” and The Women’s Sport Trust called for a ban of these roles across as sports.

The decision to ban women models in darts wasn’t without its critics.  Some accused the PDC of “political correctness gone mad” and putting women out of work, while an online petition to overturn the ban soon gained more than 36,000 signatures.

The F1 announcement has already proven to be equally controversial on Twitter. Nevertheless, the changes will commence with the start of the 2018 FIA Formula 1 World Championship season on 25 March and also apply to our other motorsports series that take place during the Grands Prix weekends.

The change may come as no surprise to some as in December, F1 managing director of motorsports Ross Brawn told BBC Radio 5 live the use of “grid girls” in the sport was being reviewed

In a statement issued on Wednesday, F1 said it considers “the time spent by teams and drivers on the grid before a race as one of celebration.”

It added the purpose of this time is so “guests and various performers can add to the glamour and spectacle of the Grand Prix, enabling promoters and partners to showcase their countries and products”.

Sean Bratches, managing director of commercial operations at F1 added:  “While the practice of employing grid girls has been a staple of Formula 1 Grands Prix for decades, we feel this custom does not resonate with our brand values and clearly is at odds with modern day societal norms.

“We don’t believe the practice is appropriate or relevant to Formula 1 and its fans, old and new, across the world.”

The news comes after The Women’s Sport Trust, a leading voice calling for gender equality in sport, called for the banning of all women models in sport in light of the PDC decision.

“Sporting viewers are expected to admire the successful, talented, strong men taking part in competition, with the role of women purely based on their physical appearance,” a spokesperson said.

“Women are being positioned as an embellishment to a sport, rather than having the opportunity to enjoy the same level of funding and media exposure as men.

Much like the PDC announcement, the F1 statement has received a mixed reaction on Twitter. Some have applauded the decision, saying it makes motorsports more accessible to women fans.

I loved @MotoGP growing up but detested grid girls & from a young age felt it was demeaning. I would have preferred to have been on a bike racing. Why don’t we have grid men? Because they are simply trying to attract male viewers and is sexist to women on and off the track.

But others have said it is not “empowering” because the models haven’t had a say, with many pointing out women will lose jobs.

It’s as if F1 is doing everything possible these days to remove the glamour and excitement from the sport. And also, shouldn’t the grid girls themselves have any say about the matter? Not very empowering stuff, this.

Yay more women out of work. Fantastic news lol if the feminist movement keep this up will be less women in work than pre 1940s

The Women’s Sport Trust would like other sports to follow the example set by F1 and the PDC, citing boxing and cycling (particularly Tour de France) as two areas where female models are unnecessarily used.

A spokesperson from the British Boxing Board of Control told HuffPost UK they were unavailable to comment on the use of women models in boxing. HuffPost UK has also contacted Tour de France about the use of models and is awaiting response.

For those on Twitter asking how drivers will find their pit position without “grid girls”, the Sahara Force India‏ F1 team offered this alternative…

The Pink Panthers of F1 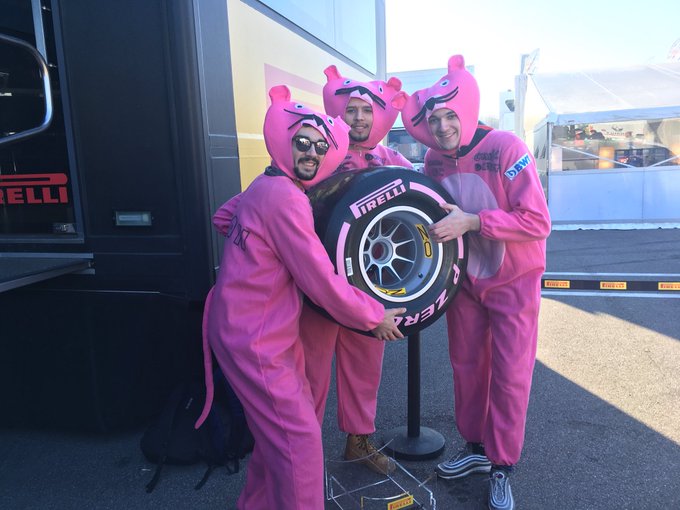 With the decision not to have Grid Girls in 2018, how will @F1 indicate the drivers’ pit position?