New York (CNN)Hillary Clinton, speaking at the 100th anniversary gala honoring Planned Parenthood on Tuesday, slammed “groups of men” in Washington, DC who are deciding the future of women’s health protections — a not-so-subtle reference to the Trump administration.

President Donald Trump’s White House drew the ire of groups like Planned Parenthood this year when it tweeted a photo of a meeting on health care between Vice President Mike Pence and more than a dozen male politicians from the House Freedom Caucus. Among the topics that they discussed: Health care reform, including a provision to remove a federal law that requires insurance companies to cover maternity leave and pregnancy care. 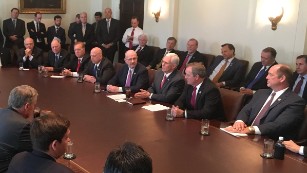 Is there something wrong with this White House photo?
“As we speak, politicians in Washington are still doing everything they can to roll back the rights and progress we’ve fought so hard for over the last century,” said Clinton, Trump’s Democratic opponent during the presidential campaign. “I mean, could you believe those the photos of groups of men around that conference table deciding to strip away coverage for pregnancy and maternity care?”
She added: “This was a disturbing blast from the past.”
After the first health care reform attempt of Trump’s presidency failed, Republicans are now pushing another health care reform bill this week, hoping to repeal Obamacare before next week’s congressional recess.
Republicans still don’t hve the votes to pass health care bill
Clinton said a bipartisan budget agreement struck earlier this week that didn’t strip Planned Parenthood of funding means women “narrowly averted a disaster with the budget,” but urged the audience not to think “our fight is over.”
“Right now, they’re trying to jam through a health care plan that would cost 24 million people their health insurance and gut funding for Planned Parenthood,” she said.
Clinton largely steered away from reflecting on her failed 2016 bid Tuesday night, a departure in tone from an earlier Tuesday event when she commented at length about why she lost, blaming herself, along with FBI Director James Comey and attempted Russian intervention in the campaign via WikiLeaks. 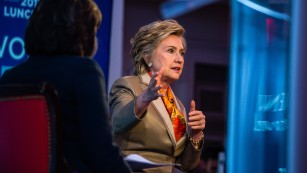 Clinton: ‘If the election had been on October 27, I would be your president’
Clinton said Tuesday night that despite not getting “the outcome we worked so hard for” she was proud that “66 million people voted for a vision of America that’s smart, compassionate, inclusive and big-hearted.”
The event was a star-studded affair. Clinton spoke after actress Meryl Streep (she met with Streep earlier in the day, a spokesman said) and producer Shonda Rhimes. Comedian and actress Tina Fey, comedian and actor Ed Helms and top Clinton donor and producer Harvey Weinstein were also in attendance.
While urging action, Clinton also pushed the attendees to try to understand the people who disagree with Planned Parenthood.
“After decades of arguing back and forth, I think it’s safe to say that people of goodwill and good faith will continue to view this issue differently,” she said. “So, yes, I believe we can and should respect the deeply held beliefs of our friends, our neighbors, our fellow citizens, even when they differ from our own. That’s part of what should make America America.” 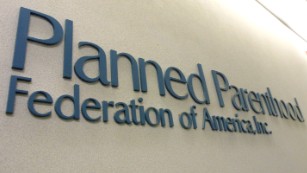 Planned Parenthood: Fast facts and revealing numbers
But, Clinton added, activists should “never back down from our commitment to defend the ability of every woman to make these deeply personal decisions for herself.”
Planned Parenthood offered Clinton vocal support throughout the 2016 campaign and Clinton thanked them for their backing on Tuesday night. Since Clinton’s loss, the organization has drawn the ire of Trump and other Republicans, including in the president’s proposed budget, which suggested defunding the women’s health organization.
The bipartisan budget deal struck earlier this week included funding for Planned Parenthood, though, a win for the organization and Democrats on Capitol Hill.
Clinton closed her speech with a reference to “The Handmaid’s Tale,” a new Hulu show based on the 1985 book by Margaret Atwood where women’s rights in a dystopian future erode.
“The show has prompted important conversation about women’s rights and autonomy. In ‘The Handmaid’s Tale,’ women’s rights are gradually, slowly stripped away. As one character says, ‘We didn’t look up from our phones until it was too late,'” Clinton said. “It’s not too late for us, but we have to encourage the millions of women and men who support Planned Parenthood’s mission to keep fighting.”