Actress Rose McGowan today  publicly accused Harvey Weinstein of raping her as Scotland Yard announced it was launching a full investigation into claims that the Hollywood producer assaulted a woman in London.

McGowan, former star of the TV series Charmed, wrote on Twitter: “HW raped me” and accused Amazon Studios of ignoring her complaints and dropping her show after she made the allegation. In a series of tweets she accused Amazon movie head Roy Price of failing to take her allegations against Weinstein seriously.

The 44-year-old actress, one of Weinstein’s more than 30 alleged victims, claimed Price said her rape claims were not proven when she tried to advise him against bailing out the film mogul’s company. She claims he responded by shelving a show she was developing for Amazon.

Price was today placed “on immediate leave of absence” by Amazon after separate allegations were also made by a female producer that in 2015 he made a number of inappropriate remarks to her on a business trip. In a statement Amazon said: “Roy Price is on leave of absence effective immediately. We are reviewing our options for the projects we have with The Weinstein Co.” There was no comment from Price.

The latest development came as the Met said it had completed an “assessment” of allegations that Weinstein sexually abused an actress in London in the Eighties and would launch a full inquiry. The claim, made by a woman understood to be now living in the Liverpool area, is the first to be reported to police in this country since the claims emerged last week that Weinstein sexually assaulted and harassed multiple Hollywood actresses.

Scotland Yard said today: “The Met was passed an allegation of sexual assault by Merseyside police on Wednesday. The allegation has been assessed and will be investigated by officers from the Met’s Child Abuse and Sexual Offences Command.”

Detectives are expected to seek to interview Weinstein about the claim if he visits Britain in the future. He is known to have visited the UK several times in the Eighties and Nineties. Weinstein’s representatives say he “unequivocally denies any allegations of non-consensual contact”. 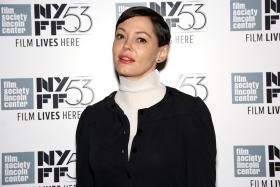 McGowan said a year ago that she had been raped by a “studio head”, but at the time did not name anybody. Last week the New York Times reported that Weinstein made a $100,000 settlement to her in 1997, said to include a clause against speaking publicly about it. “I told the head of your studio that HW raped me,” McGowan said in a new tweet to Amazon boss Jeff Bezos.

Friends of TV presenter Myleene Klass said today she was propositioned by Weinstein in Cannes in 2010 but told him to “f*** off”.