Women from across the globe are conquering every bit and element of challenges placed before them. Women continue to display a level of intellect that has enabled each one of us to occupy society’s continuum of opportunities as never witnessed before. The success stories that continue to occupy headlines from Wall Street, The Forbes among others are a sign of how entrepreneurial women are.

One woman who has set, focused and conquered the largely male dominated business world is Indra Nooyi, CEO Pepsi Co. 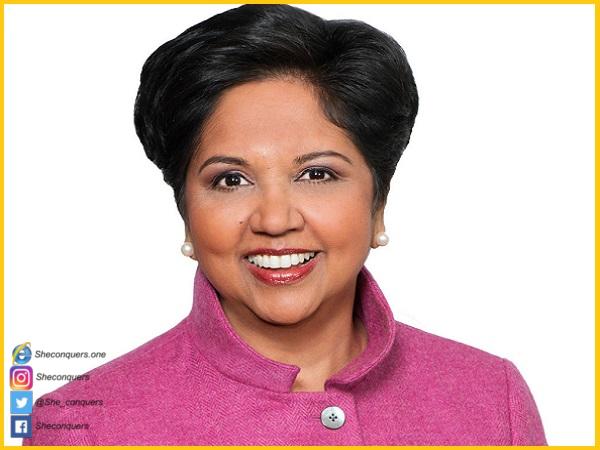 She has demonstrated to all women that once set and focused there are no limits to success.

The story of Indra is a Cinderella story that amplifies the message that your current situation is not your final destination.  She wasn’t born in a middle or upper class family nor had golden opportunities we at times wait for before taking charge of our lives.

The now powerful Indra Nooyi, was born on 28th October, 1955, into the Tamil family in Chennai, India. At an early stage, she got influenced by her mom who cultivated and nurtured her thinking. She became self-motivated and developed the desire to succeed early on in life.

After completing her high school she went on to attain a Bachelor’s Degree in Physics, Chemistry and Maths from Madras Christian College. To some attaining a first degree would have been just enough but Indra never settled but was determined to pursue further education, earning herself a Post graduate diploma in Management from the prestigious Indian Institute of Management in Calcutta.

The foundation and education grounding became a premise for a start in her career path , starting with two years with Johnson & Johnson and a firm named MetturBeardsell in India.

For someone who was already earning a living, she still felt that her story was still unfolding. Indra was to make a sacrifice, giving up her averagely comfortable life in India to purse the American dream where she attained a Masters degree from Yale school of management. With limited cash, she part funded her studies with a part time job working as a receptionist from midnight till sunrise.

The sleepless nights paid off , with a masters from a prestigious university Indra started work as a strategist with Boston Consulting Group. What is more striking is how she had to put more effort and hard work to prove to her male counterparts of her worth.

Fuelled and determined to see through her career, she worked for Motorola before joining Pepsi Co. in the year 1994. Indra’s commitment to hard work saw her move up the company’s ladder until she she became the CFO and President of Pepsi Co in 2001, the world’s fourth-largest food and Beverage Company.  Since becoming CFO, the company’s annual revenues rose 72%, while net profit more than doubled, to USD 5.6 billion in 2006. Today the company’s net  revenue  is in excess of  $66 billion, making it the second largest food and beverage’s company in the world.

As both an immigrant and a woman, working towards her success was a tall order. She never let her challenges limit her ambitions. Indra proved to us all women that you can be a wife, mother, a daughter and still be successful. Her story is inspiring and motivating to every woman. Nooyi is the 11th to break into the top echelons of power. Presently, there are only 10 Fortune 500 companies that are run by women.

2 Comments on Indra Nooyi. A journey from the village to boardroom