Kamala Harris, the first-term California senator and the state’s former attorney general, has officially launched her presidential campaign for 2020, jumping into an already crowded Democratic field with no clear frontrunner.

“Let’s do this, together. Let’s claim our future. For ourselves, for our children, and for our country,” Harris said in a campaign video that was released to coincide with her TV appearance.

The 54-year old portrayed herself as a fighter for justice, decency and equality in the video. “They’re the values we as Americans cherish, and they’re all on the line now,” Harris says. “The future of our country depends on you and millions of others lifting our voices to fight for our American values.”

Harris’s announcement follows the entrance of her fellow senators Elizabeth Warren of Massachusetts and Kirsten Gillibrand of New York and comes as several other colleagues are also weighing presidential bids. That list includes Cory Booker of New Jersey, Sherrod Brown of Ohio, Amy Klobuchar of Minnesota and Bernie Sanders of Vermont.

Who will run in 2020? The full list of Democrats vying to take down Trum

In the run-up to her campaign launch, Harris traveled the country on a book tour that she used as an opportunity to introduce herself – beginning with how to pronounce her name. “It’s ‘comma’ then add a ‘la’,” she told an audience in Washington, explaining that it means lotus in sanskrit.

Harris will likely use that mnemonic trick again as she campaigns around the country. A recent NPR/PBS NewsHour/Marist poll found that 54% of a Democratic primary voters were unsure of, or had never heard, of Harris.

In the book, she casts herself as a perfect fit for this political moment. She has a compelling biography that often draws comparisons to Barack Obama mixed with a record – and plenty of viral material – of standing up to Trump on the issues that most inflamed the liberal base, from the travel ban to the Daca program for young undocumented people to the Kavanaugh supreme court nomination.

Harris is the daughter of an Indian mother and Jamaican father who met in Berkeley, California, at the height of the civil rights movement.

She began her career as a deputy district attorney in Alameda county, California, before becoming district attorney of San Francisco, where she focused on crime prevention. In 2010, she narrowly beat her Republican opponent to become California’s attorney general. Six years later she was easily elected to the Senate, where she became the second black woman ever to serve in the chamber. 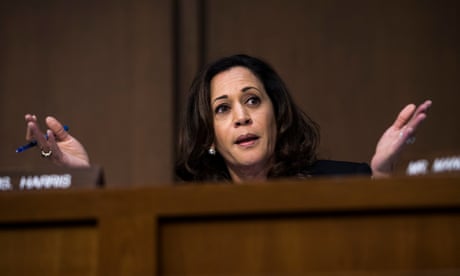 Since arriving in the Senate, she has built a reputation for bringing a prosecutorial style of questioning to hearings with Trump nominees. In a combative exchange with the former attorney general Jeff Sessions, he said her rushed questions were making him “nervous”.

While the skills she honed in the courtroom have served her well in the Senate – and helped to elevate her to the forefront of the anti-Trump resistance movement – progressives have lingering and serious questions about her career as California’s “top cop”.

A recent op-ed published in the New York Times by University of San Francisco law professor, Lara Bazelon, accuses the senator of having been “often on the wrong side of history” when she served as the state’s attorney general. She pointed to her support of an initiative that threatened the parents of habitually truant elementary school children with jail time. She also defended a prosecutor who falsified testimony, only relenting after the case attracted national attention. 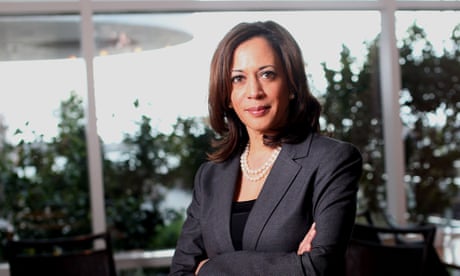 Harris has highlighted other aspects of her record. She touts Back on Track, a program instituted while she was the DA in San Francisco, which allowed first-time nonviolent drug offenders a chance to have their charges dismissed if they completed vocational training. And in her book she recounts a “shouting match” she had over the phone with the JPMorgan Chase boss Jamie Dimon during the foreclosure crisis: “I took off my earrings (the Oakland in me) and picked up the receiver.” It’s an anecdote certain to draw wild applause from anti-Wall Street liberals on the stump.

Harris is aligned with many of her colleagues and the other contenders on policy, including her support for Medicare-for-All-style healthcare. During the 2018 midterm elections, Harris campaigned on behalf of several women and minority candidates.

With relatively few differences on policy among the potential Democratic contenders, the party’s months-long primary is likely to revolve around questions of identity, electoral strategy and style as as much as ideology. Voters will choose who is best suited to take on Trump and who can appeal to the party’s many constituencies, which include white rural voters, young people, college-educated women and people of color.

Associated Press contributed to this report