LIPSTICK UNDER MY BURKHA : Untold stories of women to remain, “Censored”; time to move ahead from ‘ Ban Culture’? 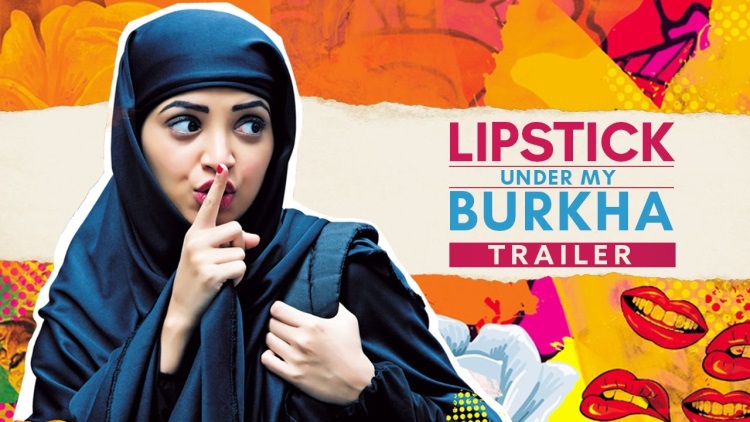 When I first heard about the new project from the Prakash Jha Productions titled , ” Lipstick Under My Burkha” , I knew this was something which was going to lead me to the multiplex. But now with the recent maneuver from the side of Central Board of Film Certification (CBFC), my plans have been shelved and might stretch to an indefinite period of  time .

The “ban culture” in India is quite common whether be it books, films, paintings or even sculptures in some cases. In India, it is inevitable to get a certificate  for films under the Cinematograph Act, 1952 from the CBFC.  The ban around films get a common consciousness as they are meant to be disseminated to a wider audience. The first ban came in the year 1959 with Mrinal Sen’s ” Neel Akasher Neechey” which focused on the troubles faced by an immigrant Chinese wage laborer in 1930s, similar to the political undertone of Satyajit Ray’s documentary , ” Sikkim”. The film was banned after Sikkim’s merger in India in 1975, as it showed the Chogyal-ruled Sikkim as a sovereign state. The ban was lifted much later only in September 2010 . Back in 1970, the Shabana Azmi starrer , “Kissa Kursi Ka” which was India’s first political spoof  was effectively banned by the then-Congress government led by Indira Gandhi . This was a scathing satire on Sanjay Gandhi’s rise to power.  Now this film title is commonplace in Indian lexicon. While on the contemporary scene, productions like “India’s Daughter”, “Udta Punjab”, “50  Shades of Grey”, “The Girl with the Dragon Tattoo” continued to be on the CBFC’s scanner.

Now, although these films had political, religious or sexual overtones,  “Lipstick Under my Burkha” added a new genre including feminist films to be banned by the statutory body now. While refusing to certify the film, a communication by the Central Board of Film Certification (CBFC) to producer Prakash Jha said, “The story is lady oriented, their fantasy above life (sic). There are contaniuous (sic) sexual scenes, abusive words, audio pornography and a bit sensitive touch about one particular section of society, hence film refused (sic).”  CBFC chairman Pahlaj Nihalani was found quoted, “The film was first refused a certificate by the examining committee and after a show-cause was issued to the producer, they made an application to have it viewed by a revising committee — a larger committee. The revising committee headed by me unanimously refused a certificate. The idea of the film may be of women empowerment but the depiction and presentation showcases obscenity and vulgarity and there was no scope to even give cuts and clear it. For instance, it has scenes of ‘phone sex’ and many explicit scenes for long durations at regular intervals. In keeping with the guidelines and keeping in mind the impact the film may have, it was unanimously refused. The filmmaker can approach the tribunal now.” It cannot be forgotten that while facing frequent controversies, the Union Information and Broadcasting ministry had constituted a committee under filmmaker Shyam Benegal. The recommendations, including reconstituting the CBFC as a certification authority, were submitted to the ministry in April 2016 and are still under consideration.

The  Madhya Pradesh unit of the All India Muslim Tehwar  has condemned the film as against the “dignity of women and tenets of Islam”.  But Prakash Jha , who has a mark in Bollywood for highlighting socio-political issues, stated “I believe my film is a beautiful story about section of women, who feel these things but never say something like this. The movie, ‘Lipstick Under My Burkha’, states how suffocated their lives are and how suffocated their dreams become. It is not about Burkha, but it’s a story about Ratna Pathak, who is a Hindu and Ahana, who is also a Hindu.”

The film which stars Konkona Sen Sharma and the veteran Ratna Pathak Shah was first screened at the MAMI Film Festival in 2016. It won the Spirit of Asia Prize and the Oxfam Award for Best Film on Gender Equality. Oxfam said that the film was picked because it “creatively and effectively takes on marital rape, religious orthodoxy, sexuality of older women and, more importantly, women taking agency over their bodies.”

Feminist films have come a long way now, “The Seashell and the Clergyman” (1928) can be best remembered for its raw take on issues around women at that time.  The film features a central female character, who is deeply subversive and resists the power of the king and the desire of the priest. In one memorable sequence she holds aloft a burning bra – prefiguring a much later activism! The film was banned by the British Board of Film Censors in 1927, who wrote: “this film is so cryptic as to be almost meaningless. If there is a meaning, it is doubtless objectionable.”  As a part of the New German Cinema , filmaker ) Margarethe von Trotta made “Marianne and Juliane” (aka The German Sisters) where she explored the twin themes of state repression and family guilt. The film is a unique female perspective on a violent period in West Germany’s postwar history, as well as representing the contribution of female militancy.

Even if we talk about modern day film-makers, Marzieh Meshkini is one among a number of women directors working in contemporary Iranian cinema. The film is structured in three episodes and each segment tells the story of a female at a different stage of her life.  Each vignette shows the disappointment and thwarted desire that women experience. The setting of Kish, an island in the Persian Gulf, with its vast stretches of sand, provides the film with its visual impact.  Hollywood classic “Mona Lisa Smile” (2003)  starring Julia Roberts also focuses on women issues and revolves around a teacher at a women’s college in the 1950s. At her first class, Katherine discovers that her students have already memorized the entire textbook and syllabus, so she uses the classes to introduce them to Modern Art and encourages discussion about topics such as what makes good art. Katherine comes to know her students and seeks to inspire them to achieve more than marriage to eligible young men. who encourages her students to use their incredible education for greater good than simply finding a husband. This film questions and understands the fundamental tension of society wherein education for women is nothing more than a good  criteria to seek a more eligible mate.

“Women without Men” (2009) is also part of the Iranian film industry which is set in the middle of Tehran where protestors demonstrate against the overthrow of the prime minister. But in three women’s lives, the political is far from the most difficult thing they face. As they try to win their own personal freedoms within their homes, these characters deal with the oppression their country faces trickling down into their trying and terrible domestic struggles.

It is time that our policy makers understand that women can never be fully empowered as long as their stories are not heard. It is important that films, art and culture are used as mediums to mainstream the voices of the marginalized, oppressed, women , children who suffer sometimes to the extent of irrecoverable damage at the hands of major stakeholders of power and hierarchy. Sometimes it is best to leave a subject to the wisdom of the audience, unless it is not outweighed by genuine overriding public interest.