The singer was talking after a video about her personal experiences of racism went viral over the weekend.

“Some people that have posted [similar videos] have lost a lot of fans,” she said. “I think it’s disgusting – but it just proves what we’re saying.”

The star’s Instagram video went up on Saturday as people around the US and the UK protested against the death of George Floyd.

Pinnock, whose parents are mixed race, said she had “the biggest awakening of my life” when filming the video for Little Mix’s 2012 single Wings.

On the set, black director and choreographer Frank Gatson told her: “You’re the black girl. You have to work 10 times harder.”

She said: “Never in my life had someone told me I would need to work harder because of my race.” Later, the words rang true.

“My reality was feeling lonely while touring to predominately white countries where I sing to fans who don’t see me, don’t hear me, don’t cheer me on,” Pinnock said, holding back tears.

“My reality is constantly feeling like I have to work 10 times harder and longer to make my case in the group, because my talent alone isn’t enough.”

She concluded the video by encouraging others to discuss their experiences of racism, in the hope of raising awareness and change.

Speaking on This Morning on Tuesday, the star said her experiences had often been downplayed by the predominantly white team who work with Little Mix.

“People would say to me, ‘It’s in your head. Of course people love you, what do you mean?'”

That led to a sense of “misplacement” and “feeling not like I really belonged”.

However, she said she had been encouraged by the global response to Mr Floyd’s death, and how that had opened up the conversation about race.

“I don’t care if I lose fans,” she said. “Now the whole world is speaking about it and hopefully there is going to be a change. I feel hopeful.”

“It’s the covert racism that is so damaging” in the UK, says singer Jamelia

“The ignorance and indifference of white people allows a level of complicity… to be anti-racist you have to be actively part of dismantling the systems that you benefit from”http://bbc.in/3dSFfRO 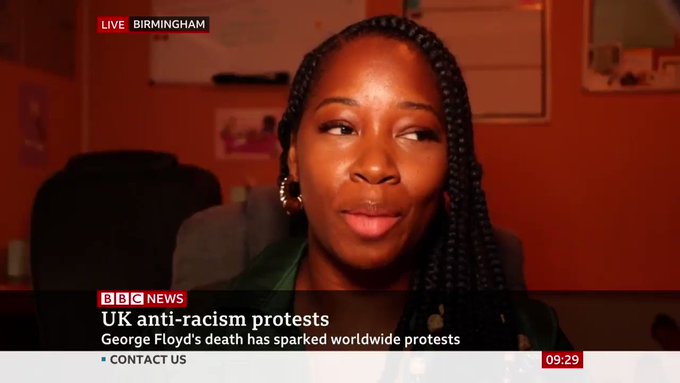 1,853 people are talking about this
Report

Her comments were echoed by fellow pop star Jamelia, who told BBC Breakfast that the “ignorance and indifference of white people” had allowed racism to flourish in the UK.

“You contribute by not being aware,” she said, saying there were biases at play in the education system, the judicial system and in securing loans for homes and businesses.

Once those issues were exposed, “it’s not enough to just say ‘I’m not racist’ because you’re not a purveyor of overt racism,” the Birmingham-born singer added.

“If you benefit from the system, knowing that people are being oppressed and affected by it, then you are racist.