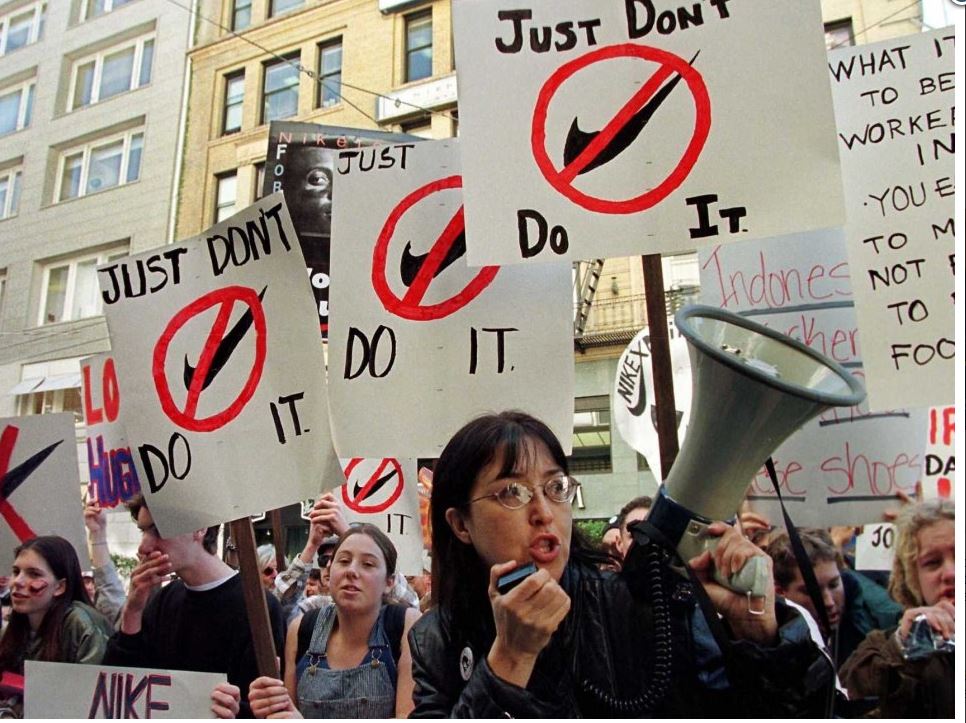 It’s never a good time for companies to grapple with a scandal over sexist behavior. At Nike Inc., it’s especially awkward given its ambition to target female shoppers.

The world’s largest sports brand expects much of its future growth to come from selling more sneakers and gear to young women. And fresh concerns about a locker-room mentality could hurt Nike’s reputation with a demographic group that it desperately needs.

That risk looms over a company that saw two high-profile executives step down last week amid a broader review of misconduct. The men reportedly stood by while subordinates were demeaning to women and people from other countries — behavior that brought a painful moment of soul searching to a business that has long touted its progressive spirit.

Chief Executive Officer Mark Parker is poised to make his first public remarks since the controversy surfaced when he delivers earnings on Thursday.

“It’s an enormous reputational risk,” said Davia Temin, founder of the crisis-management company Temin & Co. “We know millennials want to work for places that have a higher purpose. They are going to put their buying power in the same place.”

The company is especially ripe for being deemed phony and inauthentic, she said. Unlike some other businesses caught up in the #MeToo movement — a push to improve treatment of women, especially in the workplace — Nike has marketed itself as a champion of female empowerment, Temin said. Anything that undercuts that image could be a brand killer, she said.

The fresh scrutiny comes at a time when Nike is trying to bounce back from a sales slump in North America. The company has suffered two straight declines in the key market.

“When we became aware of behavioral issues in some parts of the company, we took action swiftly,” spokesman Greg Rossiter said. “We’re taking it seriously, and taking steps to address it.”

Nike pointed to recent internal research done with a third party that showed for every dollar a male employee makes in compensation, a woman in a similar role makes 99.6 cents. And it’s about the same ratio for minority employees versus white workers.

The company also said that its global workforce is 48 percent female. Women account for 41 percent of management positions. And a third of Parker’s direct reports are women.

“We are focused on attracting and retaining more women and people of color,” Rossiter said.

Still, the optimism surrounding Nike was much higher two years ago. At the time, Nike was dominating the industry, and Parker predicted that women would fuel a 60 percent sales increase to $50 billion by 2020.

Since then, a resurgent Adidas AG and the fashion shift away from items like basketball shoes — a Nike strength — derailed the company. It’s since had its first major layoffs in years, and pushed off that revenue goal by two years.

“The competition is much stronger today,” said Brian Yarbrough, an analyst at Edward Jones. “It’s going to be hard for them to get back to where they were.”

With the misconduct problems, the company is now facing an internal crisis that some have compared to the 1990s sweatshop scandal, when it was heavily criticized for using Asian factories with poor working conditions. Trevor Edwards, who was head of the Nike brand and seen as the likely successor to Parker, resigned from the post last week — just as the company announced it was reviewing complaints about behavior in its ranks. Nike will only say that there were no direct allegations of misconduct against him.

Jayme Martin, who reported to Edwards, also stepped down and is no longer a Nike employee. Unlike Edwards, he did face accusations of improper behavior from people within the company, according to a person familiar with the situation, who asked not to be named because the matter is private. The Wall Street Journal previously reported on the allegations against Martin.

In announcing Edwards’s departure, Parker said he would be staying as CEO beyond 2020, helping soothe concerns about a disrupted succession.

Investors had a muted reaction to the management tumult. The shares are up less than 1 percent since the company disclosed the resignation of Edwards. Wall Street analysts, meanwhile, have noted that Nike has a deep reserve of talented executives.

“I’m a bit surprised there hasn’t been much of a reaction,” said Laurent Vasilescu, an analyst from Macquarie Capital USA Inc. Investors are probably happy to be seeing Parker staying beyond 2020, when he’s due to turn 65, he said.

So far, the company has said nothing about how it plans respond to the concerns. It also declined to say whether it had hired third-party consultants to help. One step the company has made is publicizing a hotline for employee complaints.

In the wake of the sweatshop scandal, which peaked when documentary filmmaker Michael Moore attacked the company in one of his movies, Nike founder and then-CEO Phil Knight pledged to make substantial changes. Within a decade, the company became an industry leader with increased standards and transparency.

Parker lived through that as one of Knight’s top executives, and has the opportunity to steer Nike back toward a leadership position again, according to Temin.

“They can lead on how to do this,” Temin said. “They can do it. Whether they will, or not, is something we’ll all watch.”

Parker also needs to show progress to stop an exodus of employees. Competitors, such as Under Armour Inc., have recently opened major offices in Portland, which is a few miles from Nike’s headquarters.

“It’s definitely a headwind to manage,” Edward Jones’s Yarbrough said. “Will we see more talent running out the door?”