A Saudi teenager given asylum in Canada after fleeing her family has said the journey was “worth the risk” so she could live a more independent life.

Rahaf Mohammed, 18, made headlines when she flew to Thailand and barricaded herself in a hotel while appealing on Twitter for help to avoid deportation.

She said she feared being killed if she was sent back to her family.

“It’s something that is worth the risk I took,” she told the Toronto Star and CBC News. “I had nothing to lose.”

“We are treated as an object, like a slave,” she said. “I wanted to tell people my story and about what happens to Saudi women.”

Under Saudi Arabia’s guardianship system, women must obtain permission from a male relative to travel outside the country, study abroad on a government scholarship, get married or even leave prison.

Ms Mohammed – who has dropped her surname, al-Qunun – alleged that her family had subjected her to physical and psychological abuse.

“In the beginning they locked me up for six months after I cut my hair… because it is forbidden in Islam for a woman to dress like a man,” she told reporters at the office of an immigrant settlement agency in Toronto.

“But I was mostly exposed to violence by my mother and my brother,” she added. “They were beating me and there was corporal violence.”

While she was in Thailand, Ms Mohammed also told the BBC that she had renounced Islam – a crime that is punishable by death in Saudi Arabia.

She had been on a trip to Kuwait with her family when she fled on a flight to Bangkok on 5 January, saying she intended to take a connecting flight to Australia and had an Australian visa.

But she says her passport was seized by a Saudi diplomat when he met her coming off the flight, leaving her stranded. 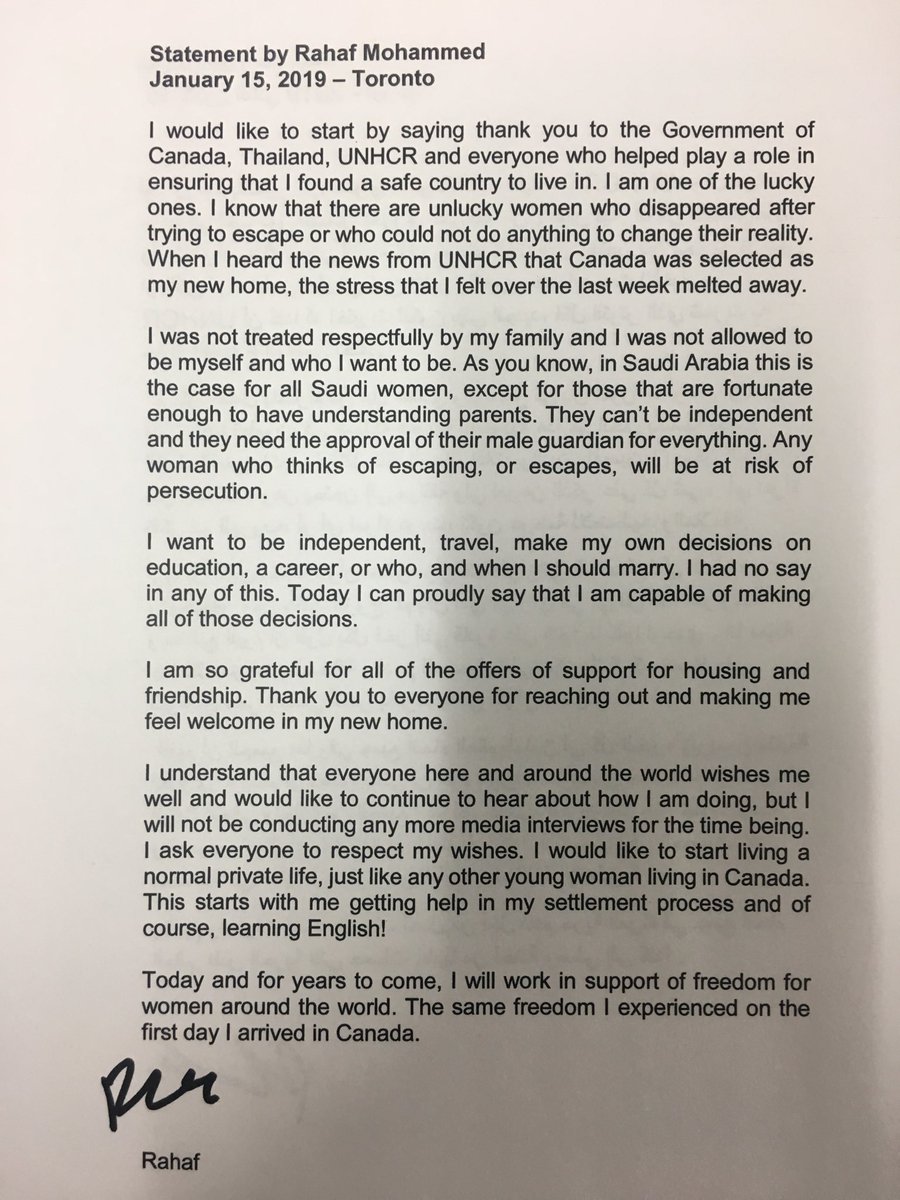 Ms Mohammed then sent a series of tweets pleading for help from her hotel room.

“During this time, I was thinking about what kind of goodbye messages I would write, because I was not going to allow them to take me. I was prepared to end my life before they kidnapped me,” she told CBC.

Her case was picked up by Human Rights Watch and numerous journalists. Thailand eventually allowed her to stay and the UN assessed her claim for asylum.

On Tuesday, Ms Mohammed gave a statement to media in Toronto and called herself “one of the lucky ones”.

She said that she wants “to be independent, travel, make my own decisions on education, a career, or who, and when I should marry”.

“I had no say in all this,” she said in Arabic. “Today I proudly say I am capable of making all those decisions.”

Last Friday, Canadian Prime Minister Justin Trudeau announced that his country would accept Ms Mohammed as a refugee. The following day she was met at Toronto’s international airport by Foreign Minister Chrystia Freeland.

Ms Freeland and her ministry enraged the Saudi government in August when they called for the release of several women’s rights activists campaigning for the male guardianship system to be abolished who were detained as part of an apparent crackdown on dissent.

Riyadh responded by freezing all new trade with Canada and expelling its ambassador over its “interference” in the kingdom’s domestic affairs.

The Saudi government has not commented since Ms Qanun’s arrival, but the head of the state-funded National Society for Human Rights said on Monday that he had been “surprised by some countries’ incitement of some Saudi female delinquents to rebel against the values of their families”.

She added: “I feel born again from feeling the love coming from everyone waiting for my arrival.”

Ms Mohammed said that, although the Canadian weather may take some getting used to, she was excited for the new experiences ahead.

“I will try things I haven’t tried,” she said. “I will learn things I didn’t learn. I will explore life…. I will have a job and live a normal life.”

Like a typical 18-year-old, one of the first things Ms Mohammed did upon her arrival, after getting clothing appropriate for the Canadian winter, was purchasing a smart phone, an official at the immigrant settlement agency said.

The Canadian government offers refugees financial support for up to a year, as well as help with finding housing and registering for federal and provincial programmes, and English lessons.

Mario Calla, executive director with Costi Immigrant Services, which is assisting Ms Mohammed in Canada, said they have temporarily hired a private security guard for the Saudi teen because of the threats she has received on social media.

He said that because of the possible risks they are considering settling her – at least for the foreseeable future – with a family to ensure she is not living alone.

Her fast-tracked refugee claim has not been received entirely without criticism and Mr Trudeau was asked this week what message it sent to the many other refugee claimants hoping for Canadian asylum.

The prime minister said her asylum was granted on a “specific and precise request” by the UNHCR, adding “we know that this is quite an exceptional case but Canada will always be there for people who are in difficulty”.

Mr Calla said her case is not without precedent, and that his organisation alone receives about two “urgent protection” cases a year.