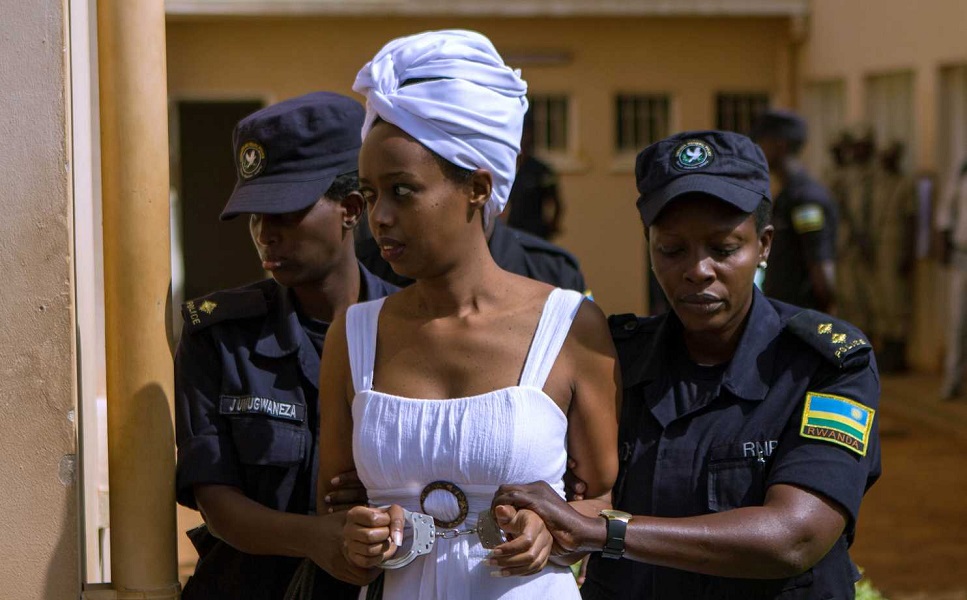 She announced she was running for president. Then fake nude photos were released.
The Post’s Karen Attiah talks with Rwandan activist Diane Shima Rwigara about what happened after she announced she would challenge Rwanda’s longtime president, Paul Kagame. (Gillian Brockell, Kate Woodsome, Karen Attiah, Daniel Mich, Malcolm Cook/The Washington Post)
Paul Kagame, the former general turned president of post-genocide Rwanda, is waging war again. His regime’s new enemy is no warlord, or experienced opposition politician, but rather, a 35-year-old businesswoman and accountant.

Kagame’s ruling Rwandan Patriotic Front (RPF) party seems hellbent on destroying Diane Shima Rwigara at all costs. The daughter of a prominent Kigali businessman who died under mysterious circumstances, Rwigara has been critical of Kagame’s authoritarianism, just as her father was. She announced her intent this year to challenge Kagame in the presidential elections; just a few days later, fake nude photos of her appeared online and spread all over Rwandan social media. She pressed on with her political efforts nonetheless, until the government barred her from formally becoming a candidate, claiming she had forged the signatures needed to get her name on the ballot. After her disqualification, she announced that she wanted to start a youth movement. She was punished for that, too: Fake nude photos of her were spread on the Internet all over again.

As if the public humiliation and political silencing weren’t enough, Rwigara, her mother and sister were arrested in September. She is on trial this week in a Kigali court, and she and her mother were denied bail on Monday. First she was charged with tax evasion; now she is being accused by the state of forgery and inciting insurrection — which could carry a prison sentence of up to 15 years. Adeline Rwigara, Diane’s mother, told a panel of three judges that they had been tortured and had once gone without food and medication for a week: “We were handcuffed day and night, without eating or drinking.” Diane’s younger sister Anne, who was also arrested, said that the women had been kept in solitary confinement.

Rwigara, while brave, posed little to no threat to Kagame, who has effectively been in power in Rwanda since the end of the 1994 genocide. He holds a tight grip over the country’s politics, jailing dissenters and clamping down on press freedom. Kagame won the August election with more than 98 percent of the vote. Under new constitutional rules that his party helped engineer, he could potentially remain in power until 2034. Given all that, why is his party so afraid of Rwigara, a young woman who has little political experience? As she said in her commentary for The Post: “If the RPF is so loved in Rwanda as it claims, why is it so scared of me running and competing against it?”

If anything, allowing Rwigara to run would have given the elections this year at least some glimmer of legitimacy. Instead, Kagame’s regime is choosing to silence her. Rwigara’s saga should make the world see clearly: Kagame’s government doesn’t give a damn about democracy.

Rwigara’s heinous treatment at the hands of the Rwandan state also blows up the narrative that the nation is some sort of global nirvana for women in politics. Western development agencies love to tout the fact that women fill 64 percent of the seats in parliament. But why should this matter if Kagame’s agenda is the only agenda? And Rwandan women who dare to challenge Kagame for the presidency have not been successful. In 2003, Alvera Mukabaramba was the first woman to campaign against Kagame — but the day before the election, she abruptly threw her support behind Kagame. In 2010, after years of being in exile, opposition leader Victoire Ingabire returned to run for the presidency, only to be thrown into jail. She was charged with supporting acts related to terrorism and of perpetuating “genocide ideology.” She is currently behind bars, serving a 15-year prison term.

Thankfully, members of the European Parliament have raised questions about Rwigara’s case. But largely, the West’s sense of guilt about the 1994 genocide, its reliance on Rwanda for peacekeeping efforts and its belief that Rwanda is a good return on substantial development aid fuel excuse-making about Kagame’s abuses.

Two weeks ago in Washington, Kagame was a featured speaker at the fall World Bank meetings. He said, “We are talking about people in real terms. … By investing in health, education and creativity, we turn our people into individuals who have the ability to think and act, not just for themselves but also for the benefit of their communities.” In reality, in Kagame’s Rwanda, free-thinking individuals such as Rwigara are thrown into prison, and many exiled opponents, by Kagame’s own admission, just “tend to die.”

The question I pose to the officials of the World Bank and development agencies is this: Is the donor-client relationship with Kagame so sensitive that Western leaders feel they can’t speak up for Rwigara? Are development agencies comfortable with being complicit in helping Kagame to build a society based on fear and total political domination? It sure seems that way. As long as the iron fist of Rwanda’s ruling party stamps out critical voices such as Rwigara’s, any hope for a healthy democracy and a free society is laughable.