Three people discuss current events on television: The older male host sits across from his two female guests. He is 67; they are decades younger. He wears a suit and tie, they wear tight dresses. His face is lined and pale; theirs are uniformly smooth and accented with colored lip gloss.

A sexual harassment scandal involving the man leads the news cycle on every other media platform, but it’s just another Tuesday on “The O’Reilly Factor.”

O’Reilly insisted that none of the accusations were true, but after the news broke, high profile advertisers began pulling their spots from “The O’Reilly Factor,” the National Organization for Women and other groups called for Fox News to fire its top-rated anchor and people began tuning into the show to watch what the famously bellicose host would say.

Instead, they saw what they always see on Fox News: A paunchy, older man in drab office attire sharing the screen with beautiful, younger women in figure-revealing outfits and low necklines.

The O’Reilly scandal is just the latest development in the queasy revelations of Fox News as a predatory environment; in July, Chief Executive and founder Roger Ailes resigned in a hail of sexual harassment suits and allegations, some of which have been settled, while other, new ones have been filed.

For months after, female employees and former employees came forward to describe a workplace that sounded more like the early grope-happy days of “Mad Men’s” Sterling Cooper than a modern media institution. A place where women were pressured to look a certain way — high heels, lots of makeup, short skirts.

“Fox News masquerades as a defender of traditional family values, but behind the scenes, it operates like a sex-fueled, Playboy Mansion-like cult, steeped in intimidation, indecency, and misogyny,” declared a lawsuit filed by Fox anchor Andrea Tantaros alleging sexual harassment by Ailes and others.

Now, it appears that O’Reilly has also been very much a part of that behind-the-scenes culture.

But you don’t need access to the soundstages and hallways of Fox News to see that culture at work.

The on-air dynamic of an older, not necessarily attractive, male authority figure and his lovely female guest (look, she’s beautiful and smart too!) is such a trademark of Fox News that the network probably couldn’t be expected to recognize how bad it looked as yet another sexual harassment scandal unfurled.

And it isn’t just “The O’Reilly Factor.” Compared to CNN and MSNBC, most of Fox News network’s female reporters, anchors and hosts are discernibly more dolled up than their competitors.

Though other networks are also fond of the older male/younger female pairing, women on Fox News are invariably more overtly, and uniformly, styled — the smooth sculpted hair, the shiny lips and that airbrushed look of scripted daytime television.

It’s an antiquated vision of the working woman: She can bring home the bacon, as long as she never lets him forget he’s a man.

But it’s a high-wire walk not every women is willing to take, especially in those heels. The network’s top-rated female anchor, Megyn Kelly, left Fox News for NBC earlier this year after she alleged in her memoir that Ailes made unwanted sexual advances toward her.

Greta Van Susteren also left the network after Ailes’ departure; her refreshingly unremarkable hairstyle and pantsuits can no longer be used as a shining example of progress at the network.

The culture of Fox News doesn’t stop outside the studio doors. President Trump, who appears to gain much of his intel from network programming such as “Hannity,” asked that his female White House staffers “dress like women” shortly after he was sworn in.

Vice President Mike Pence has said that he never dines alone with women who are not his wife, nor does he attend functions without his wife if alcohol is being served.

Never mind that the reality of a working American in 2017, or even 1987, ensures that men and women will be alone, near food, at some point during the day. Or maybe not if you work on the Hill. Among Congress’ 535 voting members, only 26 are Republican women.

The president defended O’Reilly on Wednesday from the Oval Office, saying he believed that the Fox News host had done nothing wrong and that he should not have settled with his accusers. No one knows better than Trump that, even if you’re caught on tape bragging about sexually assaulting women, it can be spun six different ways if Fox News is in your corner.

Wendy Walsh, a former Fox News guest who is not one of the five who settled with O’Reilly, recently held a news conference in which she said, “It is terrifying to speak out about a man as powerful and vindictive as Bill O’Reilly.”

According to his new book, “Old School,” O’Reilly sees himself as a crusader against all that is PC, a no-nonsense guy who pushes against the liberal agenda of lefty “snowflakes.” He longs for a simpler time in America (a time too when you could count the number of national female news anchors on two fingers).

Conservative ideals are under attack, he says, and as MacMillan Publishers’ Web page for “Old School” notes: “This book will explain the looming confrontation so even the ladies on The View can understand it.”

But the snowflakes may already be winning. For three weeks in a row, and the first time ever, MSNBC’s “The Rachel Maddow Show” has outperformed O’Reilly in the 25- to 54-year-old demographic. And she’s done it without a tie, or blindingly bright lip gloss. 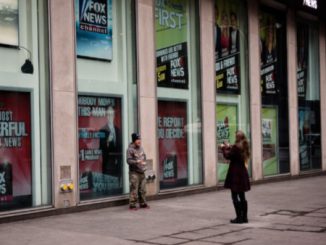 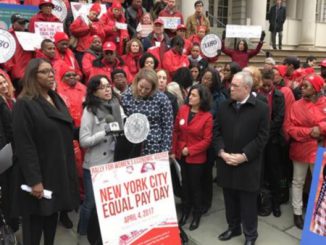