There is never a shortage of lewd comments which are often aimed at women at work, a place meant to allow one to develop their career and earn a living. Wow, seems some women can never catch a break. If you can relate, some women get sexually harassed from their homes, on transit to work and even at work.  The intensity and magnitude of the impact is only known to the victim.  Isn’t it sad and disheartening that generally more than half of female employees of all ages have been victims of some form of pestering at different times in their careers. The abuse ranges from dirty jokes to unsolicited advances, groping and outright demands for sexually related favours.  I can almost say with certainty that most women have encountered some degree of sexual harassment at work or work related events where colleagues would pass uninvited sexually inclined comments.

Prevalence of sexual harassment is sometimes correlated with posturing of pseudo power exerted on some women to cow  and abuse them sexually at work. It could be a Director with Personal Assistant; Personal Trainer with client; Arm Officers with women colleagues of  the same force; Movie director with an actress; TV producer and new anchor or supervisor with subordinate. Anyone within the rank of a work place can assume the role of a harasser. Sexual harassment at work should never be trivialised as it can alienate you, making it difficult for you to exude any form of confidence and self-esteem. It certainly erodes your abilities to focus and function freely, effectively stopping you from working to the best of your abilities. Noone should be subjected to it. 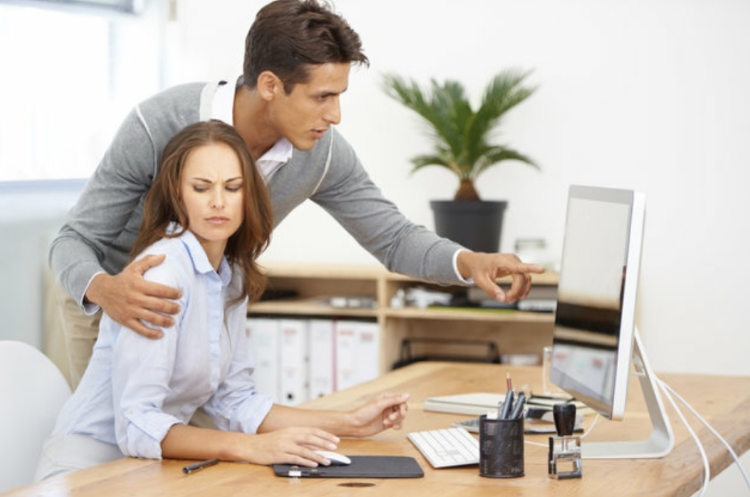 Sometimes it is difficult to tell if you are being harassed sexually. If you are suspecting that you are being sexually harassed but your are not sure, here are some of the tell-tell signs to look out for.

The list of the likely signs is not exhaustive. Just realise as Katie Lee Gifford put it “sexual harassment is complex, subtle, and highly subjective”.

What would you do when you are going by your business and all of a sudden a stranger gropes you? Do you just smile, do you confront them, do you scream or call for help? Your impulses respond to the threat accordingly and based on where you are domiciled you dial emergency numbers to report the abuse. On the contrary, strangely you freeze out and fail to report work place sexual abuse either internally or to officials because you are too scared to say what actually happened choosing to feel humiliated. When a stranger abuses you, you hardly think if they could be a CEO, a judge, politician, a billionaire; you just care less about their status than you do about getting them reigned in. When it comes to your work mates, why should hesitate to make a report? Just because someone has influence over your job doesn’t mean they can abuse and imprison you. How can you stop sexual harassment as you cant be yoked to it as if it’s the price for a paycheck?

You might have worked for the business for some time that it feels like your second home but as less strange as your colleagues are they too should be treated as complete strangers when it comes to your boundaries. There is hardly anything family about a workmate. The same day when a workmate fails to realise that a workplace is a different environment that should precondition and inform their behaviour, perhaps different from the environment at their favourite pub or club where wanton behaviour is accommodated, is the same day they qualify to be strangers. You see, a work place demands cordial relations, mutual respect and team work.

It takes great leaders and good companies to ensure that their business take full responsibility and create infrastructure and environment where all employees including women feel safe. In this modern day where mindsets have been nurtured and cultivated through rigorous natural and sometimes forced civilisation processes, you would think that sexual harassment should be a thing of the past. As undermining, and humiliating as it is, only savages can find this non-degrading and take it as a charming way to lure a woman. In the first instance it’s a work place, not a hook up place, yes people at the same work place can date or fall in love but am sure they expect any to be partners to approach them with utmost respect and dignity.  As women we should all stand together, support one another and send a unified message to say enough is enough. Angelina Jolie puts it well when she says ‘We must send a message across the world that there is no disgrace in being a survivor of sexual harrassment– the shame is on the aggressor’

6 Comments on Sexual Harrassment at Work