Anyone found carrying out FGM will face up to three years in prison, according to a document seen by the Guardian.

The council of ministers approved the new law on 22 April, but it still needs to be passed by members of the sovereign council, which was created following the ousting of former dictator Omar al-Bashir.

Amira Azhary, from the National Council for Child Welfare and a campaigner for the Saleema initiative, which campaigns for an end to the practice, said: “We expect that the law will be passed by the sovereign council and if that happens, it will be an expression of the political will in this country.” 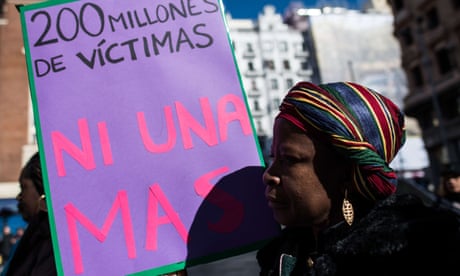 Sudan has one of the highest rates of FGM in the world. According to the UN, 87% of Sudanese women have undergone the practice. Girls are usually cut between the ages of five and 14.

However, because the practice is entrenched in Sudanese culture, activists expect it will take a long time to be eradicated entirely. “There is so much work to be done. This is a start, a good start,” said Fatma Naib, communication officer of the UN children’s agency, Unicef, in Sudan.

“The crucial step will be to ensure there are consequences for those who perform the cut on their girls.”

Some states in the country banned FGM a few years ago, but attempts to ban it nationally were not successful under Bashir.

“Sudanese women along with the Egyptians and Somalis have been leading the fight against FGM,” said Nimco Ali, a leading anti-FGM activist who heads up the Five Foundation, a global partnership to end the practice. “Sudanese women have always wanted to end FGM. Sudan took the same path as Egypt politically – and that means women can also lead and be part of the transitional government.”

The UK’s international development secretary, Anne-Marie Trevelyan, tweeted: “In our turbulent world, fantastic to see the new government in #Sudan outlawing female genital mutilation. There is no place for #FGM in the 21st century.”

Baroness Sugg, the UK’s special envoy for girls’ education, tweeted: “This is a vital step towards a world where every girl is safe.”

FGM involves the partial or total removal of the female external genitalia for non-medical reasons.

The UN estimates that 200 million women and girls have undergone FGM in 31 countries – 27 of which are in Africa. However, a report published in March said the number could be much higher as the practice is carried out in more than 90 countries, many of which do not collect data.

World leaders have pledged to eliminate FGM by 2030.