The strictest of the recent laws – an outright ban in Alabama that would make providing an abortion a felony punishable by prison – was signed into law by the state’s governor, Kay Ivey, on Wednesday.

It is just one measure in a wave of social conservative efforts designed to challenge Roe v Wade, the supreme court ruling that legalized abortion across the US in 1973. Already in 2019, Ohio, Georgia, Kentucky and Mississippi have passed bans outlawing abortions once cardiac activity is detected, as early as six weeks and before many women know they’re pregnant. At least nine other states are considering such bans. 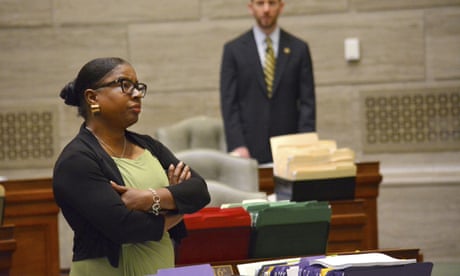 On a national level pro-choice groups are mobilizing their supporters and resources – including legal teams – to combat the laws.

Naral Pro-Choice America, which has more than 2 million members, and Planned Parenthood form the backbone of reproductive rights in America, with the capacity to file lawsuits and direct national strategy.

Both have tapped into a well of support since Trump’s victory in the 2016 election and are now seeing another fresh flood of interest and passion from their members, said Ilyse Hogue, Naral president.

“Alabama was a tipping point. The energy we’re seeing now is completely unprecedented in my time as president of Naral and really in my time as an adult,” she said.

Hogue said Naral is pursuing “the organizing strategy and the electoral strategy … where the long-term remedy lies”. Naral has introduced a one-stop website “to give people one central place to plug in, both for the immediate fight and for the long-term”.

Planned Parenthood, meanwhile, has promised to challenge the Alabama ban in court and to keep spreading the word of legal abortion in restrictive states – showing women how they can still go about exercising their right to an abortion.

As the national battle plays out in courts and the ballot box, reproductive rights groups on the ground must combat the state-by-state effort to block abortion access by providing transportation, financial assistance and other help to those women seeking abortions, as well as educational resources, birth control and counseling.

Marcie Crim is one of those activists who has been fighting the rising tide of anti-abortion laws. In March, Matt Bevin, governor of Kentucky, signed a six-week abortion ban into law in her state. After Kentucky elected a Republican-majority legislature in 2016, Crim, the executive director of the Kentucky Health Justice Network, had developed a contingency plan to handle what they knew would be an oncoming escalation of abortion restrictions. Now the moment was here.

Crim and her team researched the nearest out-of-state clinics, compiled a list of drivers willing to transport women over three hours, and prepared to redirect the budget for emergency transport.

Still, the immediate impact of Bevin’s signature that Friday was “incredibly scary and upsetting”, she says. Kentucky’s one remaining abortion clinic sent patients home, and cancelled appointments scheduled for Saturday.

Crim found an open clinic in neighboring Illinois, directed staff to contact nearby hotels, and called up the list of drivers.

By Friday night, the American Civil Liberties Union (ACLU) of Kentucky filed suit and a judge granted a stay, keeping Kentucky’s clinic open. “But we didn’t know if all of that was going to happen until later that Friday night,” says Crim, describing her fear that day as “a whole new kind of feeling”.

Contingency plan, transport list, ACLU suit and court stay – this cycle has played out in several states across America in recent months as a network of reproductive and civil rights groups fight to protect women’s access to abortion in the wake of increasingly restrictive laws.

In Alabama, local groups that support women seeking abortions saw an outpouring of donations in the wake of this week’s ban.

Amanda Reyes, co-founder of the Yellowhammer Fund, which provides funding to women seeking abortion, told Teen Vogue that the group has received more donations than ever before. Record donations have also poured in to the Power House, which provides assistance to women seeking care at a clinic in Montgomery, Alabama. “This is probably the most we’ve gotten in one day, ever,” Mia Raven, the director of the Power House, told the Daily Beast.

In Alabama, there have been constant demonstrations all week, including an airplane flying an “Abortion is OK” banner above the governor’s mansion. A bigger protest is planned for Sunday in Montgomery, featuring speakers from the state’s most influential pro-choice groups. Sister protests are also planned in other cities.

The state-by-state effort to confront abortion restrictions continues a decades-long, largely women-led movement that has fought for reproductive rights. During the civil rights movement, University of Chicago student Heather Booth launched Jane, a now-famous underground network that counseled women and connected them with doctors who would perform abortions.

Facing a conservative federal government in 2019, some states have also passed laws that seek to defend a woman’s right to abortion, rather than restrict it.

This week in Maine, the governor and state house of representatives backed a bill that would end a decades-long ban on using state funds for abortion services, counteracting a federal ban on funding abortions. In January, New York joined nine other states, including California and Oregon, that have also built abortion protections into state law in case Roe v Wade is overturned.

There have also been other ways that people have sought to protest and overturn the laws; or punish those who have passed them. Georgia, which this year passed one of the most restrictive laws in the country, has earned the ire of Hollywood, and seen some actors and producers threaten to cease working in the state’s booming entertainment industry. A Maryland official is threatening to disinvest his state’s $52bn pension fund from Alabama businesses.

Staci Fox of Planned Parenthood Southeast, which serves Alabama, Georgia and Mississippi, said that it was her state’s politicians who would be held accountable to the threat on women’s right to choose.

She said the group had received an influx of calls from hundreds of women unsure if they could still access abortion and other Planned Parenthood health care services after the Alabama vote.

“We have to fight with everything we have,” Fox said.