Women in Zimbabwe donned black clothes and shunned makeup to protest against sexual violence by the country’s security forces during the government crackdown on protesters and opposition activists.

Trending under hashtags including #OurBodiesNotWarZones, #SheSpeaksOut, #InjureOneInjureAll and #ShutDownAtrocities, “Black Wednesday” campaigners called on the Zimbabwean authorities to take action against military personnel accused of rape and sexual assault.

Police claims that they have received only one report of rape were widely condemned by women’s rights groups.

“It is difficult to trust the regime at the moment because they are not owning up to their actions. We demand that the regime owns up to their actions,” said a statement from the Women’s Academy for Leadership and Political Excellence (Walpe), a centre dedicated to women’s empowerment that supported the campaign together with Justice for Women Zimbabwe.

Walpe successfully urged men to join in the Black Wednesday protest. “We need the voices of men also to support women, so that women may restore their confidence in men,” Walpe said.

The protest came after police officials frustrated at the apparent impunity of the military shared more than a dozen investigation reports with the Guardian that suggest soldiers have been responsible for murder, rape and armed robbery.

Scores of women and girls say they have been raped over the past two weeks by army officials who have ransacked houses in the high density suburbs of Harare, ostensibly in search of protesters accused of destroying property during a three-day shutdown called by unions a fortnight ago.

A dozen people were shot dead and a further 78 reportedly treated for gunshot wounds in the violent protests, which were triggered by a 150% increase in fuel prices.

According to human rights defenders, many victims of rape are choosing to recover at home in fear of retribution from state agents. Grisly reports of rape and sexual assault have been reported across the country since the unrest began.

Human rights lawyers say women who have been raped are afraid to seek medical treatment from public hospitals. Women have also been subjected to humiliating beatings on the buttocks, thighs and breasts during the current crackdown.

A mother of three who says she was raped in Southlea Park, a poor community on the outskirts of Harare, said: “One of the soldiers said I should comply with everything that they wanted to do with me. I didn’t refuse, because I wanted to save my children. I told them I was HIV positive but one of them said it didn’t matter, so I complied.”

Walpe said it was difficult to identify perpetrators of sexual assault because they wear masks and balaclavas. “We are calling on all women who have been abused by uniformed forces to report to independent bodies,” Walpe said.

Doug Coltart, a human rights lawyer, said rape victims were living in fear and could not report perpetrators, while the police refuse to investigate. 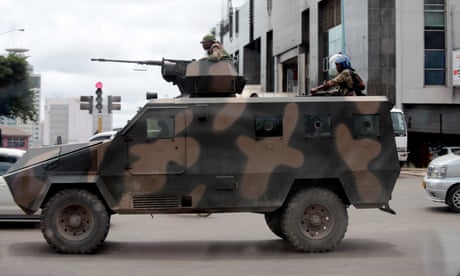 Coltart said: “The continued beatings, rape and abductions by the military are totally unlawful. There have been multiple instances where women have gone to the police to report rape, saying it was committed by soldiers, and the police don’t want to be involved. A lot of women don’t feel safe going to the police. It’s a small percentage of rape victims who are reporting.”

Soldiers have remained on the streets while a crackdown has continued in Harare’s high-density areas, where most rape cases have been reported.

Walpe said it feared for disabled women who cannot defend themselves.

The Black Wednesday protest comes a day after lawyers also took to the streets, demanding a return to the rule of law and fair trials for the hundreds of protesters currently in detention