In glorious sunshine the streets of the capitals of England, Scotland, Wales and Northern Ireland filled on Sunday afternoon with marching, cheering, singing, chanting women, rejoicing in the centenary of some women winning the right to vote in 1918 – and vowing to continue the struggle for true equality for all.

The events were both a commemoration of the mass marches and demonstrations of the suffragettes’ campaign, a celebration of their ultimate victory, and a reminder that there is still more to do at a time when women’s rights in Northern Ireland are a burning political issue.

The veteran politician Shirley Williams, observing the many men who did not march but stood on the pavements cheering on friends and family in the processions, told the BBC: “There has been a staggering leap forward and all we have to do now is persuade the men to leap forward to join us because they haven’t got there yet.” 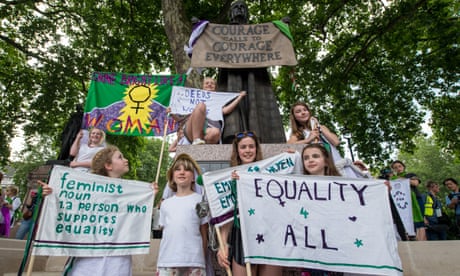 Women take part in the Processions living artwork in the UK

Lady Williams said: “We’re slowly getting equality, but the next step is recognising the equality and the decency of all human beings, women and men.”

The thousands of banners, from kitchen table cardboard placards to hand-stitched works of art that had taken months to create, repeated suffragette slogans such as Deeds Not Words, or made more contemporary calls to action such as, on one London banner, “A woman’s place is in the Boardroom”, or “Love Football, hate homophobia”. One group chanted “Equal seats, equal voices”, as they marched under a banner calling for equal numbers of men and women in parliament.

In London alone, more than 30,000 women are estimated to have joined the procession, wearing the green, white and violet colours of the suffragettes. As they marched towards Parliament Square the procession completely filled Pall Mall, where a century ago women smashed the windows of the men-only clubs to draw attention to their cause.

Thousands more joined processions in Belfast, Cardiff and Edinburgh. There were estimated to be more than 100,000 in total. Many women travelled hundreds of miles to join an event, with some coming from overseas. The Rural Arts group brought their beautiful landscape banner, with the slogan All Women Standing Together, made by a group of women aged between six and 96, from Thirsk in North Yorkshire to the London march.

In Belfast an Irish linen banner, proclaiming Action Equals Change, was made by women from both sides of the sectarian divide. Pro-choice groups from both Northern Ireland and the Republic joined the procession.

In Edinburgh, where the procession passed the columns of the Scottish National Gallery wrapped in the suffragette colours for the event, a group of students from Edinburgh College of Art joined with women prisoners from Cornton Vale: each woman created a small patch for the Every One Is Equal banner, but the two groups never met face to face. The prisoners obviously could not join the march, but the project sparked an intense discussion among the students about whether they should be allowed to vote.

In Cardiff a group carrying a banner reading “Dalati – Keep Going” recalled their countrywomen who, more than a century ago, spent three weeks walking to London to join a demonstration organised by Emmeline Pankhurst.

As the marchers gathered in each city, they were handed free scarves in the suffragette colours : 400,000 were handmade from specially dyed cloth in India for the event – and choreographed so that from above the colours formed one giant suffragette banner.

The Processions event was devised by the public arts events creators Artichoke, whose director, Helen Marriage, admitted the original idea of marking the centenary by recreating one of the suffragette’s giant demonstrations was suggested by a male friend. It formed part of the official 14-18 NOW arts festival marking the centenary of the first world war.