Thousands of protesters will take to the streets across the US on Saturday to resist Donald Trump and stand up for women’s rights at the third annual Women’s March.

Though this year’s event has been marred by controversy, participants will seek to channel the spirit of the first massive march in 2017 that saw hundreds of thousands of protests take over the nation’s capital the day after Donald Trump’s inauguration, spurring activism and political campaigns by women around the country.

“It’s time to march again. The 2017 Women’s March inspired hundreds of women to run, millions more to vote, and dozens to win elected office. The 2019 Women’s March marks two years of resistance to the Trump presidency, two years of training new activists, and two years of building power,” the Women’s March says on its website. “And this time, we’re coming back with an agenda.”

Organizers plan to unveil a 10-part federal policy platform dubbed the Women’s Agenda at the event, with proposals on combating violence against women, reproductive rights, and racial and economic fairness.

“Women are just not on the agenda in this current administration,” the Women’s March chief operating officer, Rachel Carmona, said. 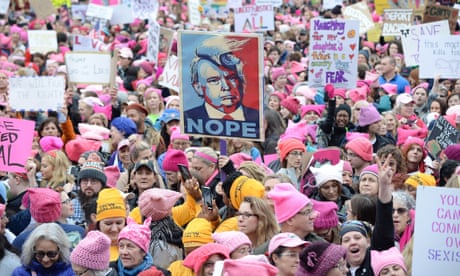 Women’s March to take to streets after controversy divides movement

Last year, organizers hosted a Las Vegas event, focusing their efforts on turning out voters in a midterm election year. This year, the main event will again be in Washington DC, kicking off at Freedom Plaza near the White House.

Speakers are set to include the professor and activist Angela Davis, film-maker Michael Moore, actors Scarlett Johansson and America Ferrera, and feminist writer Gloria Steinem. Companion marches and rallies are also planned in cities and towns around the country, from New York to Seattle.

But controversy and infighting have threatened to overshadow this year’s march, as organizers fend off accusations of antisemitism.

Tamika Mallory, one of the co-chairs of the Women’s March leadership, drew criticism after she posted a photo on Instagram of herself with the Nation of Islam leader, Louis Farrakhan, calling him “the GOAT”, which stands for greatest of all time. Farrakhan has a long history of antisemitic comments, including saying, “the powerful Jews are my enemy”.

Tablet magazine reported that at a meeting early in the planning of the original Women’s March, Mallory and another co-chair, Carmen Perez, argued that Jewish people bore a special collective responsibility for the exploitation of black and brown people, and were leaders of the American slave trade, a theory promoted by the Nation of Islam. They have denied making those comments.

In New York, there will be two separate events on Saturday because of rifts between organizers. Organizers decided not to host a march this year in Chicago. In Eureka, California, supporters opted not to hold a rally out of concern it would be “overwhelmingly white”.

In an appearance this week on ABC’s The View, Mallory said she “does not agree” with many of Farrakhan’s statements, but declined when pressed to directly condemn them.

Bob Bland, another co-chair, said the march “unequivocally condemns antisemitism” and sought to keep the focus on the event’s broader message.

“These are the leaders we’ve been waiting for,” she said of women inspired by the movement to get into politics. “We always wanted to see these women become the face of our leadership and the face of the nation, and I think that’s what we saw in the midterm elections, where we saw a historical outpouring of thousands of women running for office.”

Reuters contributed to this report.