The Dove brand sheepishly admitted that it had “missed the mark” with a not-so-vaguely racist advertisement that has made it the latest target of consumer rage.

But many angry and befuddled Dove lovers spent the weekend wondering what mark Dove was trying to hit in the first place.

The ire-inducing advertisement — a static compilation of four photos — was released Saturday afternoon. The first frame shows a dark-skinned woman in what appears to be a bathroom, a bottle of Dove body wash in the lower right-hand corner of the picture.

In subsequent frames, the woman reaches down and lifts up her shirt (and apparently the rest of her skin/costume) to reveal a smiling white woman. 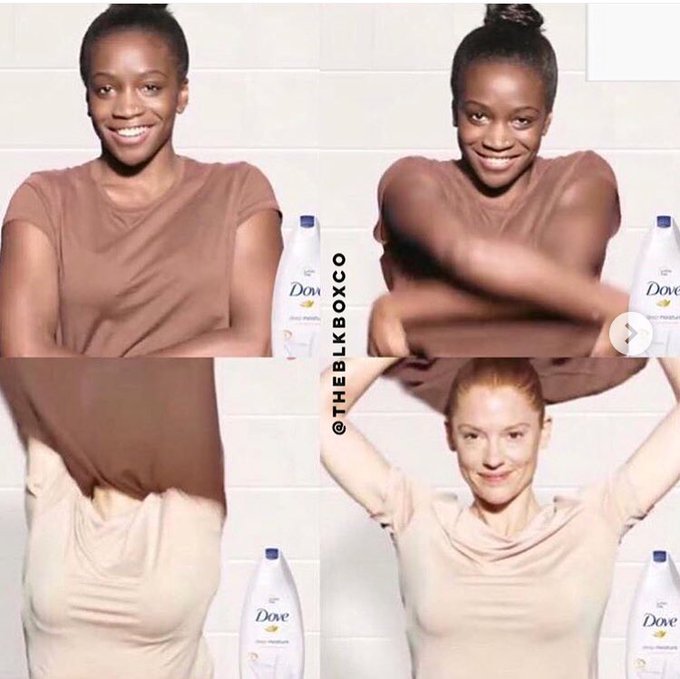 Offended Dove users erupted, and the company quickly apologized. But the two-sentence Twitter note, and a slightly longer message on Facebook left it unclear what exactly the ad was trying to convey.

The vacuum of information was filled by people on social media who peppered the company with comments and rhetorical questions, none of them good.

Was Dove saying that inside every black woman is a smiling redheaded white woman? Was Dove invoking the centuries-old stereotype that black is dirty and white is pure? Or that black skin can or should be cleansed away?

And perhaps the biggest question of all: Did Dove really believe that the ad would make more people of color want to buy its products?

“What exactly were yall going for?,” one self-described Dove consumer said on the company’s Facebook page. “What was the mark … I mean anyone with eyes can see how offensive this is. Not one person on your staff objected to this? Wow. Will not be buying your products anymore.”

Others wondered whether the problem was a lack of diversity at Dove. They pointed to historical examples of racist ads about soap so good that it apparently washes the melanin right out of your skin.

The marketing conundrum is, of course, not limited to the 60-year-old maker of soaps and body washes.

Earlier this year, the German skin care company Nivea was dinged for a deodorant ad that declared “White Is Purity.”

As The Post’s Amy B Wang wrote, there was a loud outcry from consumers, who called the ad campaign “horrendous” and a “#prnightmare.” A white supremacist group even posted on the company’s Facebook page: “We enthusiastically support this new direction your company is taking. I’m glad we can all agree that #WhiteIsPurity.”

Still, this weekend’s predicament was a curious one for Dove, a beauty company that has a 13-year-old marketing campaign centered on rejecting standard, racially insular notions of beauty in its commercials.

In May, Rhimes produced a short film for Dove about the woman who started the “Fat Girls Dance” group.

“It’s incredible to watch these ladies go from scared fat girls to, you know, completely amazing warrior fat girls,” Cathleen Meredith says in the video. “I think the entire model of what beauty is needs to be thrown completely out and we need to start defining what beauty is for ourselves.”

Dove’s marketing campaign has been criticized by people who believe that feminism and women’s empowerment shouldn’t be used as marketing tools to persuade people to buy shower foam.

As Time wrote in 2013, “Beauty companies like Dove and Pantene capitalize on feminist messages to hawk you products they’ve convinced you need.”

The article went on to say:

“One could argue that messages of gender equality are important enough that it doesn’t matter if they precede ad copy for a shampoo company. But that line of thinking conveniently misses the point, particularly when it’s beauty companies who are using feminism to sell products.

“Brands like Dove and Pantene have made millions by preying on women’s insecurities and convincing them they need to buy products to meet societal standards of beauty: sure, you’re beautiful just the way you are, but use our products and you can be even more beautiful.”

The ethics of feminism-centered marketing campaigns aside, Saturday’s ad was not the first time Dove’s users felt that it had missed the mark.

In May, Dove released six limited-edition bottles of body wash in British markets – some squat and curvy, some tall and lean – that were meant to represent variations of the female form. It advertised the bottles using the phrase “beauty breaks the mould.”

As Jess Zimmerman wrote in The Post, most consumers found the bottles, well, dumb:

“Dove’s new packaging raises a number of questions: Do all the bottles have the same amount of product?” she wrote. “Are you supposed to buy the one that looks like you? Are you allowed to buy the ones that don’t look like you? Are we gearing up for a “Divergent”-style dystopia in which society is divided according to soap format?”

And Zimmerman expressed the same confusion that irate Dove users had this weekend.

“But the most important question is: What, exactly, is the point supposed to be?”