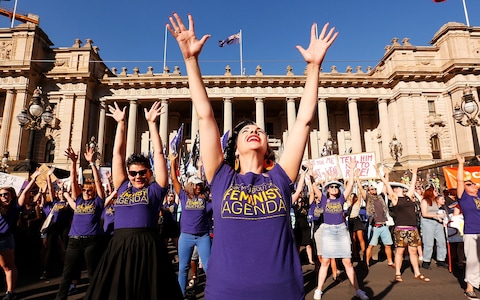 Covid-19 has put a stop to many things this year. But one thing still very much on the calendar is International Women’s Day (IWD), the worldwide event that celebrates women’s achievements – from the political to the economic, and the social – while calling for gender equality. The day has been celebrated since the early 1900s, and is now recognised each year on March 8.

IWD really began to gain momentum around the time of the #MeToo movement: since, it has become increasingly prominent, and is recognised by millions of people, businesses and charities around the world

Usually, the day is marked around the world with arts performances, talks, rallies, networking, conferences and marches. Of course, this time around things are going to look a little different.

But the pandemic has also bought its own unique challenges for women – from job losses to a rise in domestic abuse and the pressures of homeschooling – making the need for this year’s IWD more pressing than ever. Although the day was started a century ago, there are still very good reasons to mark it now.

Here is everything you need to know…

How did the event start?

It’s hard to pinpoint an exact date. The first National Woman’s Day, as it was called, was acknowledged in the US on February 28 1909. It was spurred on by a Ukraine-born suffragist named Clara Lemlich, who demanded better pay, shorter working hours and improved working conditions for 15,000 garment workers who went on strike in New York. The following year, The Socialist Party of America announced the first National Women’s Day in honour of these workers.

The day was formalised in 1910, when a woman called Clara Zetkin – leader of the ‘women’s office’ for the Social Democratic Party in Germany – tabled the idea of an International Women’s Day. She proposed that every country should celebrate women on one day every year to push for their demands. IWD was formed after a conference of more than 100 women from 17 countries agreed to her suggestion. Slowly, the event began to gain traction around the world, and it was celebrated in  Austria, Denmark, Germany and Switzerland on March 19 for the first time in 2011.

In 1913, it was decided to transfer IWD to March 8, and it has been celebrated on that day ever since.

Why do we still celebrate it?

Sadly, because there is still an urgent need for the day: the original aim – to achieve full gender equality for women the world – has not been realised. There is still a gender pay gap, female leaders are still lacking, violence against women and girls persists, and women still fall behind men in terms of education and healthcare. Last year, the UN reported that almost 90 per cent of people are prejudiced towards women globally. On IWD, women across the world come together to shine a light on these inequalities – while also celebrating the achievements of women who have overcome these barriers.

Indeed, this year the need for celebration is more urgent than ever. Global data released by UN Women suggests that the pandemic could put gender equality back by 25 years, as a result of women doing significantly more domestic chores and family care. Research by Counting Dead Women calculated at least 16 domestic abuse killings of women and children had taken place in the first three weeks of the lockdown in the UK.

Healthcare has also been affected. Marie Stopes estimates that 9.5 million women and girls worldwide could risk losing access to their contraception and abortion services because of coronavirus, while thousands of other women have missed out on life-saving breast cancer screenings and smear tests.

“Everything we worked for, that has taken 25 years, could be lost in a year,” says UN Women Deputy Executive Director Anita Bhatia. She adds that the care burden poses a “real risk of reverting to 1950s gender stereotypes.”  This echoes the aims of the Telegraph’s Equality Check campaign, which launched in June to shine a light on the lockdown gender gap.

The situation wasn’t much better before the pandemic though, when it was estimated women were burdened with three quarters of the 16 billion hours of unpaid work done each day around the world. In 2019, women in the UK effectively worked “for free” from November 14 until the end of the year because of the gender pay gap. Women are also paid less than half than men at some of Britain’s major companies, according to recent gender pay gap figures.

Abortion rights have also continued to be a contentious issue for women’s rights campaigners, heightened in the US following the death of Ruth Bader Ginsberg in September 2020. In Poland, at the start of 2021, abortion was all-but banned, sparking protests on the country’s streets.

What is this year’s theme?

The official theme for IWD 2021 is “Choose to Challenge”, recognising the need to call out gender bias and inequality. As women around the world battle the social, economic and political fallout from Covid-19, the need for this is greater than ever.

Last year, the theme was #EachforEqual, which aimed to recognise the actions we can take as individuals to challenge stereotypes and celebrate women’s achievements.

How can you get involved?

Despite the pandemic, there are still plenty of ways that you can get involved with IWD.

To tie in with this year’s theme, IWD organisers are asking people to strike the Choose To Challenge pose – with your hands held high – and share it on social media to encourage a committment to helping forge an inclusive world. Some of the submissions will be featured on the IWD website and social media feeds. You can also download the #ChooseToChallenge selfie cards.

Alternatively, you could turn your attention to fundraising for a female-focused charity. Despite the pandemic, IWD still managed to raise a six figure sum in 2020. Their charities of choice include Catalyst, Womankind Worldwide, and Dress for Success. You can find out more about IWD charities on their website.

You can also run your own digital or hybrid event. The IWD website lists a range of ways that you can host your own event within your local community, networks, organisations, and group.

How can you mark IWD this year?

Usually, the day is marked with marches – the main one being the March4Women march in London. There are also several events that pop up around the UK, and the Women of the World (WOW) festival, which takes place at the Southbank centre.

Of course, things will look different in 2021 – but there are still a host of free and ticketed events taking place across the country.

This year’s #March4Women, organised by CARE International, will be taking place as an online day of action. The central message is “Stop Telling Half The Story”, which aims to show how women are still largely absent from decision-making roles and in positions of power. In 2019, the proportion of women in senior management roles globally grew to 29 per cent. Although this is the highest number ever recorded, the percentage remained the same in 2020 – and there is still a long way to go until 50 per cent representation is achieved.

Alternatively, Equation is hosting their annual IWD event online by inviting a series of speakers to share their wisdom every Monday throughout March on Zoom. Many boardrooms continue to be male dominated spaces, but the continuing success of women in business shows the value of bringing women’s voices to the table.

If culture is more your thing, why not head to the Century of Music by British Women 1921-2021 Livestream concert on March 8, directed by violinist Madeline Mitchell. Or if you’re in need of a little mid-lockdown pick me up, then the interactive IWD2021 Imposter Syndrome Masterclass, led by Clare Josa, author of Ditching Imposter Syndrome, might be just the ticket.

But if you’re suffering from “Zoom fatigue” – and let’s be honest, who isn’t – then there are some in-person events you can enjoy. In London, the IWD 2021 ‘Rise Together walk’, hosted by the charity Rising Girl which aims to  empower and inspire girls through education, is happening on March 7. The day will start at 11am at Euston Station and participants will walk a pre-planned route around London visiting statues of women who made history (it’s £15 to register). For a full list of events in your local area, check out the official IWD website.

You could also choose to support IWD (and treat yourself) by shopping from the range of brands who have pledged to join The Princes’ Trust #ChangeAGirlsLife campaign. All donations will go towards improving education and employment opportunities for young people in the UK. Participants include The White Company, Elemis, Whistles and Phase Eight, all of whom will be donating to the Princes’ Trust if you shop on March 8.

How is IWD celebrated across the world?

Each country has their own unique way of celebrating the day. It is an official holiday in a number of places including: Afghanistan, Armenia, Azerbaijan, Belarus, Burkina Faso, Cambodia, China (for women only), Cuba, Georgia, Guinea-Bissau, Eritrea, Kazakhstan, Kyrgyzstan, Laos, Madagascar (for women only), Moldova, Mongolia, Montenegro, Nepal (for women only), Russia, Tajikistan, Turkmenistan, Uganda, Ukraine, Uzbekistan, Vietnam and Zambia.

Like in the UK, this year celebrations around the world. Barbados is hosting a three day immersive and interactive event called ‘Undeniably You’. A series of speakers will give talks, with the aim of tackling the lines between gender and race. France is hosting a virtual event ran by a class of french pupils, who will present a talk about a business woman who inspires them. Meanwhile in Canada, they are planning a virtual celebration, started with some guided meditation and ending with a networking session. Head to the IWD website to see the full list of events happening around the world.