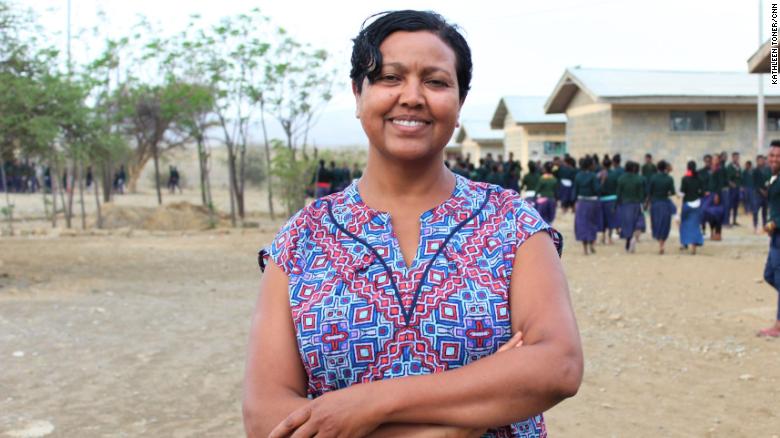 Mekelle, Ethiopia (CNN)When Freweini Mebrahtu got her period at age 13, she panicked.

“I was terrified,” she said. “And I remembered (hearing) that it’s actually a curse to have a period … or that it meant I am ready to be married, or (that) I’m being bad.”
Like most girls in northern Ethiopia, she suffered in silence, never mentioning it to her mother or sisters. With no access to sanitary products, she coped by using rags.
Attitudes about menstruation are changing. So why are they so taboo at work?
“One time I had an accident in class and I was so scared and ashamed,” said Mebrahtu, now 54. “Even today I remember how I felt.”
Mebrahtu went on to study chemical engineering in the United States. She still remembers her first trip to an American drugstore in 1983.
“I saw overwhelming choices of sanitary pads,” she said. “I started thinking … ‘What about the girls that I left behind?'”
In Ethiopia — and many other parts of the world — menstruation is still considered taboo. According to UNICEF, the subject is generally not taught in schools and most girls never discuss it with another person. Disposable sanitary products are very expensive and often unavailable, so nearly 75% of Ethiopian women and girls don’t have access to the menstrual supplies they need to manage their periods.
The situation has serious consequences. On average, one in 10 girls in Ethiopia miss school for reasons related to their periods; in some rural areas, this increases almost 50%. Missing school can lead girls to fall behind in class and eventually drop out. 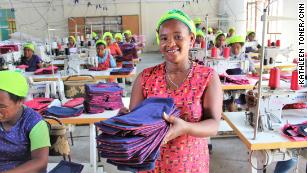 Mebrahtu believes no girl should miss school because of her period.
In 2005, she designed and patented a reusable menstrual pad. Today, she and her team produce 750,000 pads a year at her Mariam Seba Sanitary Products Factory, named for her daughter.
Since 2009, nearly 800,000 girls and women have benefited from her work.
Traditionally, girls have used rags or dry grasses to deal with their period. Mebrahtu’s pads are fully washable, with an absorbent cotton lining and waterproof backing. They are secured to the underwear with a button. The design allows it to fold up into a small, discreet package. The pads cost 90% less than a year’s worth of disposable pads and can last up to two years with proper care, making them environmentally friendly.
More than 80% of the pads she manufactures are sold to non-governmental organizations that distribute them for free.
Mebrahtu also worked for years to end the stigma around this issue by speaking to students at schools.
“The whole goal was not only making the pads, but also attacking the cultural baggage to it,” she said. “But it was very limited, because it was just me working on my own.”
That changed when she met Dr. Lewis Wall, a professor of obstetrics and gynecology from the US. He was greatly impressed with how much she was doing and in 2014, he and his wife created a nonprofit, Dignity Period, to support her work. 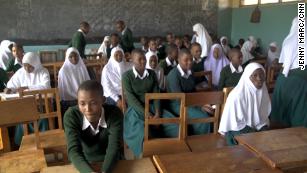 When pads are a luxury, getting your period means missing out on life
Now, in partnership with Mekelle University, the organization has greatly expanded Mebrahtu’s efforts. To date, the group has conducted educational workshops for more than 300,000 students, teaching girls and boys that menstruation is natural, not shameful. Mebrahtu speaks at these events occasionally and enjoys seeing thousands of students receiving this message.
“In Ethiopia, half of the population is dealing with this issue, but no one is willing to talk about it,” she said. “By teaching not just girls, (but) boys … we’re really transforming the thinking of the society.”
Dignity Period has also distributed more than 150,000 free menstrual hygiene kits purchased from Mebrahtu’s factory. Data gathered by the group shows that schools visited by Dignity Period had a 24% increase in attendance among girls. 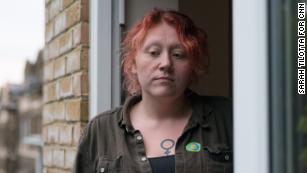 She had no sanitary pads. No one knew and no one helped
Knowing her work is making a difference energizes Mebrahtu.
“I want to see girls in Ethiopia and beyond to have access to sanitary pads and not to worry about being ashamed or scared,” she said. “Giving pads to these girls means giving them freedom so that they can achieve whatever they want to achieve.”
CNN’s Kathleen Toner spoke with Mebrahtu about her work. Below is an edited version of their conversation.
CNN: Beyond sanitary products, your factory helps improve women’s lives in other ways.
Freweini Mebrahtu: It is important to me that this product is made by women, for women. We employ 43 women today, and they take pride in making the best product. It’s also important to help the women to be economically independent, so we provide them with free training, a premium wage, paid vacation and the opportunity to grow. We never hire managers from outside. We like to move them up on the ladder. 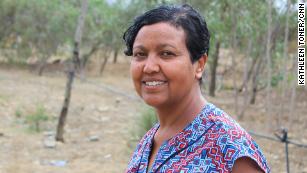 CNN Hero Freweini Mebrahtu
They also get four months of maternity leave and we also provide a free daycare center so that they continue to work and raise their child without worry. We were the first factory to provide free daycare to our workers and now it is a policy for others to do the same.
My whole goal here is to not just help them make a living. I want to teach them how to make their life much better and make a difference in their community.
CNN: And your factory doesn’t only make pads.
Mebrahtu: We also make underwear, along with the pads. Many girls and women in Ethiopia don’t even have underwear. This is the 21st century! They can’t even go on with their lives. The biggest customer we have today is Dignity Period. The premium kit that we make for them is four pads and two pairs of underwear. That makes it so a girl can stay in school, worry-free, for almost two years. We sell to (Dignity Period) at cost, which is $4.10. That means that for under $5 we can change a girl’s life.

For under $5, we can change a girl’s life

CNN: This notion of “menstrual equity” has really gotten more attention in the last few years. What was it like when you started?
Mebrahtu: When I started back in 2005, no one was talking about this. It was a struggle. It took me two years to get financing for the project because they didn’t think anyone would buy it. I had to convince them that this is a basic necessity. It wasn’t easy, but I thought, “Someone has to do this. If I don’t do it, no one will.”
When I met Dr. Wall, it was a game changer. He has so much love for women in need. It was such a morale boost. I’m so glad to be working on this issue with people who care as much as I do. There is no way that I could have done anything else in my life but this. I just want to reach as many girls as possible.