MUMBAI, India — Every year, for 41 days in November and December, millions of barefoot pilgrims dressed in black and carrying bundles of offerings on their heads trek through the deep forest along the Pampa River and up the Sabari hills in the southern state of Kerala. At one of the summits is a shrine dedicated to the Hindu god Ayyappan, who, in his avatar as a prince, is often said to have defeated a terrifying demoness at this very spot.

The pilgrimage to the Sabarimala shrine, believed to be centuries old, has strict rules. Devotees are expected to observe 41 days of ritual austerities beforehand, trimming neither hair nor nails, and forgoing meat, alcohol and sex. Custom had it that any observant person could be admitted to the temple — except girls and women between the ages of 10 and 50, forbidden on the grounds that their presence dishonors the celibate Ayyappan.

But in September, the Supreme Court of India declared the exclusion of women at Sabarimala illegal, setting off an uproar that has become a monthslong battle over differences of caste, gender, party politics and history.

On New Year’s Day, millions of women, led by Kerala’s Communist government, formed a human chain that stretched over 620 kilometers (385 miles) from the northernmost tip of the state, to the state capital, Thiruvananthapuram, in the south. Hours later, two women, aided by police officers, stepped into the Sabarimala shrine.
Women raise their hands to take a pledge to fight gender discrimination as they form part of a hundreds kilometer long “women’s wall” in Thiruvananthapuram, in the southern Indian state of Kerala, last week.CreditR.S. Iyer/Associated Press 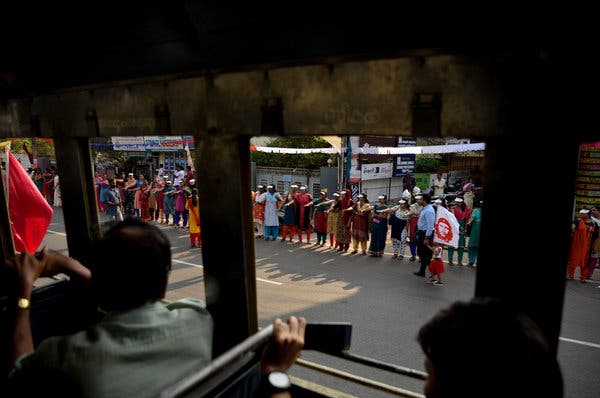 Their entry was followed by violent protests, many carried out by young men with the backing of the Hindu nationalist Bharatiya Janata Party, which governs India. The Sabarimala row has now engulfed not only Kerala, but the rest of the country. Religious sentiment and political opportunism have kept the issue in the spotlight, where it is likely to remain as the country braces for a parliamentary election this year.

India’s reputation as a brutally patriarchal society isn’t misbegotten, but it ignores how varied the status of women is here. In Kerala, because of early social justice movements and relatively enlightened governance, women have enjoyed freedoms not common elsewhere in the country. Over the 20th century, women in the state had freer access to health care and education than in many parts of India. Some communities had inheritance customs that gave women an unusual amount over control of property and private finances.

But Kerala’s Hindus could also be more rigid and hierarchical than their counterparts elsewhere. The 19th-century reformer Swami Vivekananda called the state a “lunatic asylum” for its humiliating range of caste discriminations.

Sabarimala devotees often pride themselves on having escaped these fetters. The shrine is nominally open to persons of all religions. It is not known to have practiced caste exclusion, and its priests have said they will admit transgender people without a menstrual cycle. While other Ayyappan temples in India admit women of all ages, the faithful say that the exclusion of notionally fertile women is essential to the practices of this one shrine. Some female supporters of the ban even began a campaign called #ReadyToWait — that is, for menopause.

There are those who see, in the decision to allow women into the shrine, simply the determination to destroy an old custom. Before the Supreme Court judgment, after all, there had been no mass movement,no sustained outcry over the exclusion. But for others, the fight over the fate of the shrine is also a fight over which strain of Kerala’s history — its deep orthodoxy or its fierce progressivism — will shape its future.

Kerala’s Communist Party of India (Marxist) government, which supports women’s entry into the temple, has long argued that the ban on women is a powerful symbol of injustice. The fight for gender equality, Kerala’s chief minister Pinarayi Vijayan has said, is a part of class struggle. (The state’s Communists have historically taken a reformist approach to religion; in 1959, its first Communist government fell in part because it had antagonized the Catholic Church through its plans to secularize education.)

The Sabarimala conflict is also closely bound with India’s reckoning with caste. When India freed itself from the British Empire, nowhere did the clash of old and new sound more fiercely than in Hindu temples. My own dominant-caste grandparents, who grew up in Kerala, were devotees of temples where “untouchables” were not permitted to pray until 1947, when laws on temple entry began to change in parts of newly independent India. The Supreme Court passed the Sabarimala judgment in accordance with this egalitarian spirit.

And so, even if the fight over Sabarimala is about gender justice, it’s not coincidence that the battle lines have pitted dominant-caste Keralites, defending the exclusion, against what they see as rival interests.Get our weekly newsletter and never miss an Op-Doc

Indian Hindu devotees at the Lord Ayyappa temple in Sabarimala in the southern state of Kerala in November.CreditArun Sankar/Agence France-Presse — Getty Images 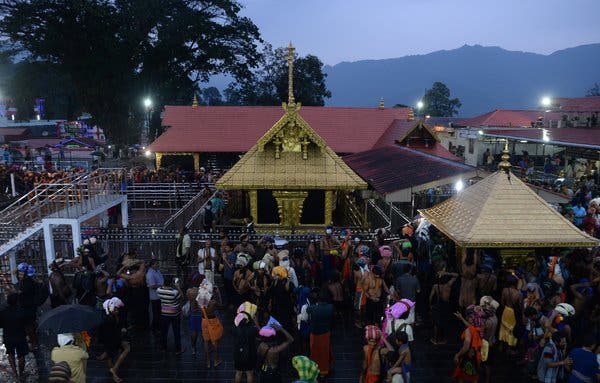 For the Women’s Wall demonstration on New Year’s Day, the Communists were joined by a rainbow coalition of social organizations representing Muslim women, Catholic nuns, marginal-caste associations, atheists, rationalists and many others. Dominant-caste associations, such as the powerful Nair Service Society, were conspicuously absent. Other parties like the Indian National Congress and the B.J.P., who initially welcomed the Supreme Court’s judgment, have reversed their positions to support the orthodoxy, sensing political opportunity — even as the B.J.P. has quietly enabled gender-neutral temple entry in states where it has power.

Meanwhile, in dominant-caste homes and temples, and on social media, some Keralites have done their best impression of a community under siege. Some of my own family scorned the hijab-clad Muslim women and the nuns turning out in feminist solidarity. The women who entered the Sabarimala shrine were widely suspected of being political plants. Last week, the temple priests closed the shrine to “purify” it of the women’s presence, a reminder of the monstrous notion of ritual pollution used to oppress marginal castes for generations — only this time it was seen as acceptable, even necessary.

The orthodoxy may yet prevail: The Supreme Court is scheduled this month to consider petitions requesting it to review its decision, and despite its show of strength, the Communist party is widely expected to have a battle on its hands in the coming election.

As for the women who entered the temple on New Year’s Day, they were smuggled in and out of the shrine like thieves in the night. But on the same day, Indians saw the face of a Malayali journalist, the videographer Shajila Ali Fathima, doggedly filming street rioting on that day with tears pouring down her face as protesters heckled and insulted her. A photograph of her, trending on news networks, seemed to embody both the spirit of the Women’s Wall and the agony of feminist struggle.

The Congress politician Shashi Tharoor, criticizing the Supreme Court judgment some months ago, said it pitted India’s democracy against its constitutional morality. The Women’s Wall, where millions raised their hands in the name of equality was, if anything, a counterargument: that each is a guarantee of the other.