Saudi women have largely embraced new laws allowing them to travel, divorce, and apply for official documents without the permission of a male guardian, and claimed conservative resistance to the sweeping decrees is doomed to fail.

The measures, announced late on Thursday, amount to a partial dismantling of guardianship laws that have long confined women in Saudi Arabia to narrow gender roles and marginalised their role in society. Such moves have been long awaited and are a centrepiece of the kingdom’s much-touted reform programme, which has pledged to overhaul rigid laws and customs that have made the country one of the most oppressive in the world. 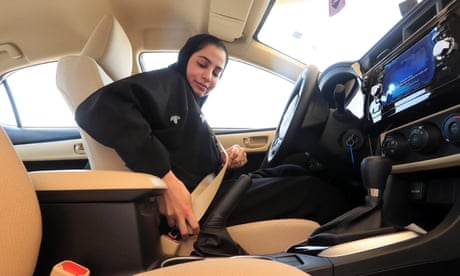 In the capital, Riyadh, women responded enthusiastically to questions about the changes, with some saying they heralded a “renaissance”, and others claiming they would profoundly improve their status.

“It means a lot to me and about time,” said Azzah, a woman in her mid-30s. “I have been to hell and back each time I needed my passport renewed, since my father passed in 2000. In 2018, I was able to renew passport without a guardian. The personal fight and standoff at the passport office was not pleasant. More freedoms, I’m sure, will be coming.

“Any pushback, if they dare, from conservatives will be beaten down. The snowball has just started [rolling]. Most of Saudi Arabia is young and ready. It won’t always be smooth sailing; when has the fight for equality ever been easy? But the process has started. I have a feeling we are arriving at a Saudi renaissance. The future looks bright … We have the spirit, the motivation and the will.”

Dr Maha al-Muneef, the executive director of the National Family Safety Program (NFSP) and a recipient of the 2014 international women of courage award, said: “This takes the dependency on men out of women’s lives. We feel very strong and empowered, and it is completing me as a woman.

“It means not only we are equal to men from a human rights perspective but on a practical level it will help women move, do their businesses, attend conferences and learn and be empowered further. It will also improve the situation of abused women dramatically because those who are affected most by the guardianship law usually suffer from domestic violence.”

Abeer Mubarak Bin Fahad, a 32-year-old MBA graduate who is searching for a job, was equally enthusiastic and said the implications of the changes were just as important for men. “The question should be what does it mean for Saudi guys who are not used to this and have been raised opposing equality,” she said. “As for conservative elements, they can’t do anything, they can either take it or leave it. If not they can leave us and move to the desert to enjoy life there, where there are no laws and no rules and they can do what they want.”

“We have stronger and stricter traditions than in Riyadh, which is something that affects women more. But it’s all about who is your guardian. As in all small towns in Saudi what really rules is the tradition and tribal customs and the honour system. Even if some of those customs are against Islam they will still be applied. Now I know my daughter, who is 10 years old, will never go through anything that I went through. For them it’s a whole different world.

“It shows us how rapidly the country is changing. In my town, people used to name-call women working in nursing as they are in a mixed work environment. Men used to refuse to marry them. Now this is never the case and we have moved forward. We don’t know what will be next but we hope it will be on the basis of our religion. Once you build something [on religious grounds] there will never be an issue.”

Wasan urged caution on some of the reforms. “I really hope they will not encourage more mixed places and normalise that in society without any restrictions.”

However, Fatima al-Abdrabalnabi, 27, said the momentum of change was forcing new realities. “Conservatives will have to live with it. It will be like women driving. Now no one even talks about [the 2017 decision to allow women to take the wheel] and women are driving everywhere.”