When I was in seventh grade in Pakistan, a classmate tapped my best friend’s shoulder and remarked: “Nice bra”. We were 12, and accustomed to friendships with boys. But youthful idealism meant less tolerance for unsolicited sexual innuendo. We marched to the headteacher’s office ready to change the world, only to be asked to repeat verbatim, several times, the words that had been spoken.

“These things happen in co-education,” we were told. The headteacher downsized our trauma, reducing our complaint to a cheap, inflated scandal. The boy escaped without punishment and the message was clear: girls, pick your battles.

Two decades later, when the #MeToo movement gained global appeal, I recalled those words. Did we make a mistake by not escalating it further? Did our school fail us by trivialising the issue and not acting? Would things have played out differently if the headteacher wasn’t male? Should we have told our families? Would I advise my daughters to act differently today?

I now realise that a 12-year-old complimenting my friend’s lingerie was symptomatic of something insidious: the taboo surrounding sexual harassment and the muting of women’s voices in Pakistan. Due to the fear of “log kia kahein gay” (what will people say), women suffer silently and are conditioned to normalise harassment.

When they do protest they are further abused and threatened, as was the case following the women’s day marches last month.

Harassment in Pakistan isn’t a tragedy reserved for the jahil (illiterate), although they are particularly vulnerable. We need an all-encompassing movement.

Over the years, I have become increasingly aware of how institutions are complicit in the silence that surrounds harassment. Schools, governments, families, religious leaders – all perpetuate the belief that sons are more valuable than daughters. While Muslim scholars prescribe non-marital intimacy as “haram”, families avoid having conversations about sex with their children. And then there are the parents who believe that hushing up and speedily marrying-off daughters who are victims is the only solution.

The result? Sexual harassment becomes a way of life and those who speak up are labelled “troublemakers”.

Pakistan requires its own exposé for this to change. But is #MeToo the answer? We seem to be torn between two possible choices.

The first would be to clone the top-down #MeToo playbook from western counterparts and apply it to cliques – mostly elitist circles. But what happens to those who don’t understand this feminist rhetoric? What about those facing daily abuse, who often believe that they are the property of men and that they are justifiably abused?

By replicating a movement developed in a vastly different context, we end up neglecting those most susceptible to harassment. Such a movement is unlikely to achieve scale and generate grassroots impact. 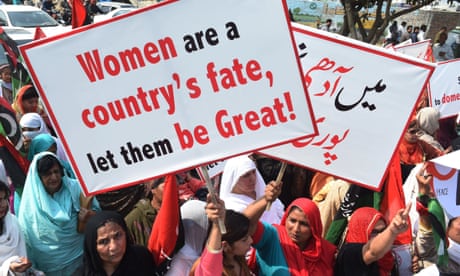 The second future we can choose is to strengthen the momentum of #MeToo and use it as a springboard to spark a more inclusive, organic movement, mindful of local settings and nuances. A movement that reaches the lowest rungs of society can offer a voice to those who most desperately need one.

How would this happen? By implementing sex education programmes in government schools, and investing resources to train both sexes about what constitutes harassment and consent, and how important it is to speak up, in a language they understand. Only when men work alongside women do we stand a chance of diminishing taboos surrounding shame and honour, and generating a movement from within.

If we successfully adapt the #MeToo spirit to our own surroundings, the victory in developed countries can go beyond speaking up – it can provide a toolkit that ensures when an individual says “No”, their response must be accepted and respected. Only then can we hope for a different future in Pakistan, one of courage rather than fear.