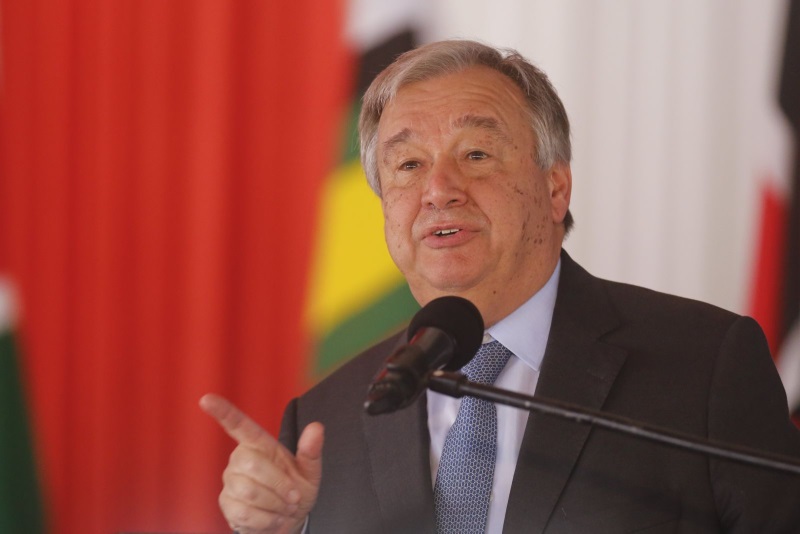 (UNITED NATIONS) — Secretary-General Antonio Guterres warned Monday that women are suffering “new assaults on their safety and dignity” around the world, pointing to extremists subjugating women and governments curtailing women’s freedoms and rolling back laws against domestic violence.

He told the opening session of the Commission on the Status of Women that educating and empowering women will unleash their potential and prevent “challenges that arise from violent extremism, human rights violations, xenophobia and other threats.”

While Guterres didn’t name any countries or groups, his message was clearly aimed at the Islamic State extremist group which sells women and girls as sex slaves. It also appeared directed at U.S. President Donald Trump’s expansion of a ban on federal aid to international organizations that provide abortions or abortion information — and to Russia for new legislation decriminalizing some forms of domestic violence.

The U.N. chief said men still dominate in every country of the world and male chauvinism blocks women from getting ahead.

The executive director of U.N. Women, the United Nations agency promoting women’s rights, told the commission that changing discriminatory laws in over 150 countries “could affect more than three billion women and girls in the world.” Phumzile Mlambo-Ngcuka also said that “advancing women’s equality in total could bring a potential boost of 28 trillion U.S. dollars to global annual GDP by 2025.”

But, she added in an echo of Guterres, while there has been some progress toward gender equality, gains have eroded and “the much needed positive developments are not happening fast enough.”

“With the global pay gap at an average of 23%, women are clearly earning consistently less than men,” Mlambo-Ngcuka said.

“Women regard this as daylight robbery,” she said. “Each year they work three months more than men for equivalent pay.”

She said over half of all women workers around the world — and up to 90% in some countries — are informally employed, such as low-cost farm workers, street food vendors and care workers, almost all without legal or social protection. In India alone, this sector accounts for 190 million women, she said.

“They are the under-the-radar and under-valued cogs in the bigger wheels of the formal economy,” Mlambo-Ngcuka said.

At an event Monday night on women’s economic empowerment, the theme of this year’s commission meeting, which ends March 24, UN Women and the International Labor Organization announced a group of equal pay “champions” to mobilize global action to achieve equal pay for work of equal value.

Oscar-winning actress Patricia Arquette, one of the champions, said last year that women were at “breaking point” when it comes to equal pay and this year she said it is “worse than breaking point.”

“Women have waited since the beginning of time to be treated equally,” she said. “I think the time has come now when we can’t wait any more.”

Retired American soccer star Abby Wambach, a two-time Olympic gold medalist and another equal pay champion, said there is definitely a gender pay gap in professional sports, but “it’s about every single industry in every single country.”

“It’s so near and dear to my heart,” she said, “because since retiring I’ve noticed that looking across the aisle, the Kobi Bryants, the Peyton Mannings, they’re having a much different conversation with themselves in retirement than I am.”

“I have to worry about paying my bills — and enough finally has to be enough,” Wambach said.

Iceland co-sponsored the event and Minister of Social Affairs and Equality Thorsteinn Viglundsson said he expects the country to be the first in the world to eliminate the gender pay gap by its target of 2022.

“We are really turning the table and saying to management and the institutions, you bear the responsibility, it is your task to make sure the gender pay gap is eliminated,” he said. “And the Equal Pay Standard that we are implementing is a perfect tool for it.”